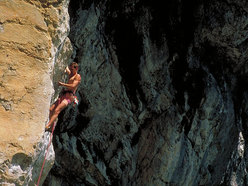 Schleierwasserfall, one of the most important crags in Austria
Photo by Planetmountain.com

Johanna Ernst (15) has on-sighted White Winds 8a+ at the Schleierwasserfall, Austria, while Helmut Kotter from Germany carried out the first repeat of Mongo 9a.

The years pass, but the Schleierwasserfall continues to be one Austria's premier testing grounds. The limestone crag beneath the Wilder Kaiser has recently been visited by Johanna Ernst who, on her first ever trip to these overhangs, climbed "White Winds". Nothing special you may think. But Johanna is just 15 years old, and White Winds was sent on-sight! Proof of her talent comes from a recent 2nd place in the first stage of the Austrian bouldering Cup, just behind Katharina Saurwein. No doubt she'll be a force to be reckond with in the very near future.

Talking about forces to be reckoned with: on 6 March Helmut Kotter from Germany made the first repeated of "Mongo" 9a, a Gerhard Hörhager project freed by Markus Bendler n 2004. The brutal 25m line is the first 9a to be repeated at the Schleierwasserfall, and two more have resisted all attempts. First asended by Alexander Huber, these are "Open Air" and "Weiße Rose" - the former dates back to 1996 while the latter to 1994...