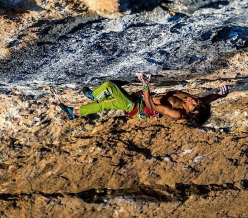 Sachi Amma climbing Fight or Flight 9b at Oliana, Spain. This is the fourth ascent after Chris Sharma, Adam Ondra and Jakob Schubert.
Photo by Luka Fonda

PORTFOLIO / gallery Portfolio: Sachi Amma climbs 9b with Fight or flight at Oliana

Sachi Amma climbs 9b with Fight or flight at Oliana

Japanese climber Sachi Amma has redpointed Fight or flight, the 9b sports climb first ascended by Chris Sharma in 2011 at Oliana, Spain.

Sachi Amma joins the select club of sports climbers capable of sending 9b, and he does so on a route that seems to have become the gateway to this kingdom of utmost difficulties: Fight or Flight at Oliana in Spain.

The route in question had been freed in 2011 by America’s Chris Sharma and repeated by Adam Ondra in 2013 and by Jakob Schubert on the last day of 2014. It was with Schubert that the Japanese winner of the Lead World Cup 2013 and 2012 attempted the route last year, exchanging information and discovering the most efficient beta to reach the anchors.

On Facebook Amma now explains he invested a total of 4 trips and more than 30 attempts to get to grips with the line that "makes me bigger as a human." His success comes after four 9a+: Biogragie at Céüse, La Rambla at Siurana, Papichulo and Pachamama at Oliana.

It is worth remembering that a 9b ascent is almost the upper limit of modern sports climbing, with only three climbs having a suggested 9b+ grade: Change at Flatanger in Norway, La Dura Dura just a few meters from Fight or Flight at Oliana and Vasil Vasil at Sloup in the Czech Republic. All three freed by Adam Ondra and so far only La Dura Dura has been repeated and confirmed, by Chris Sharma in March 2013.