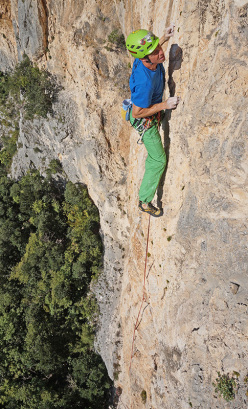 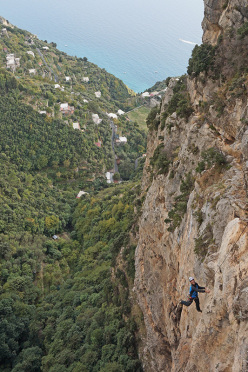 We're always on the lookout for something, possibly something hard as rock... Since I'm on the verge of turning half a century old, reaching an objective is no longer the be-all and end-all, instead it's a good excuse to fully enjoy the experience as a whole. It's along the way that one sees the most beautiful things, while searching for the unknown, meeting new people, enjoying the company of those you've shared so many adventures with. Bearing this is mind, achieving a goal is a pleasant outcome, what's important though is that the quality is always top-notch.

When autumn arrives and the summer season up the Dolomites has failed to calm our creative instincts, just like migratory birds we head south. We make our way downwards not only for the better climate, but also because down south there are still plenty of virgin rock faces with lots of unclimbed rock.

Last autumn Luca Giupponi and I headed down to the Frasassi Gorge, an area we'd first visited that spring during the local climbing meeting. I'd noticed some interesting lines after listening to the advice of my local friends, Francesco Piacenza and Samuel Mazzolini, but at the time I had to put things on hold due to the park's climbing ban (which runs from February through to the end of August).

We immediately made the first ascent of a short and very beautiful climb up a banana-shaped pillar. A day was needed for the first ascent, another to free it; we called in "Free Frasassi", in the hope that the banned areas in the Gorge might one day be opened to climbing. We had just enough time to recuperate, then we set off up our second goal, a route to the left of the huge Amphitheatre cave.

What followed were two intense and pleasant first-ascent days during which we forged a beautiful, somewhat more demanding route. With tired forearms, trashed skin and our holidays almost over we sadly returned home, but not before promising to return shortly for the redpoint. We hoped to be back soon but actually a year passed before, this autumn, we once again started to "roll south" as the song goes. The redpoint served as an excellent opportunity to split the long journey into two, seeing that this time we wanted to head much, much further south.

The idea was to head into the Abruzzo region and check out the rock there and, if it wasn't what we were after, then we'd continue on down. This time we were joined by the third tried-and-tested member of our team, Nicola Sartori, hired as the official photographer for Frasassi and an on par climbing partner for the rest of the trip.

We arrived late at night in the Gorge and early the next morning we walked along the via Crucis, no, not ours... but he real one, towards the Hermitage of Santa Maria Infrasaxa, along the first part of our approach. A year had passed and we were curious to see what we'd created. As agreed we let Nic take the lead, he'd have to climb the pitches, then abseil off a bit and take some photos. We'd obviously give him the “all clear” for the on sight should he manage to climb without making any falls; anyways, he told us he wasn't on form... He made short work of the first pitch, easy! And of the second pitch, too, just as we'd expected. It was technical and suited his style.

“Well... since you're at it ... why not give it your best on pitch 3, the crux? I remember it being somewhere in the region of 8a, but since you're doing so well, give it all you've got! Go on, Nic, you can do it!” He set off hesitantly, modest as ever, but then pulled out all the stops, showed his class, huffed and puffed and swore his way up to reach the belay unscathed, fantastic! The route was practically freed, the fourth pitch was little more than a beautiful formality. So much for him not being on form...

We congratulated him for his magnificent on-sight, watching him in action was truly spectacular, now though the time had come for us to make the the second repeat... of "Decrescita obbligata", obligatory degrowth. The name came from the "happy degrowth" philosophy; welcome concepts for our lifestyles, seeing that due to the current economic crisis they've been transformed from voluntary to obligatory. Not everything is negative though and sometimes even the worst things can have positive side-effects.

Excited and happy with our climbing, that evening we hit the road and continued down south. The next day we explored some rock in the Abruzzo region but since these didn't satisfy us entirely we continued on down to our final destination, the Amalfi coast. Luca had been there at Easter with his family and was certain that the outcrops above Montepertuso were interesting.

We slept another night in his old, comfortable van and the early the next morning we left, excitedly, to explore the righthand amphitheater that seemed more appealing. The rock looked great, it was an ideal height, it overhung wildly and it was completely untouched, what more could we ask for! We noticed two interesting and ambitious lines and chose the left one, more in the shade, seeing that it was still pretty hot. I set off like a rocket, but after 25m abruptly ground to a halt. A hard move stopped me and the dark grey rock, seemingly a solid drip of limestone, crumbled like compressed gravel, meaning that even the bolts wouldn't stand a chance. I tried to climb to the left and right but the rock quality didn't improve and, more than two hours later, I retreated somewhat disheartened. Not to worry, there was always that other line to try, so we moved across and Luca set off up the smooth yellow overhanging corner. The route was demanding right from the start, but Luca climbed well until the yellow rock suddenly got worse and began to become chossy. Here, too, the options were too smooth and difficult. After more than 30m Luca was forced to abandon his attempt. What a beating, what a defeat! It was the first time we'd made such a blatant route-finding mistake. This wasn't only due to our excessive haste and feeling over secure, but also due to the fact that the rock appears similar to that in Sardinia and Sicily, but its lie and layers are completely different, hardly weathered and consolidated by the water as it overhangs so much.

Night set in and, dejected, we retreated, a precious day had been wasted, we had few left and tomorrow we'd be back to square one. What consoled us was the fact that that evening we'd sleep at the magnificent Selva natural balcony, run by Cristiano Bacci and his family. After dinner and a good sleep we returned to the base of the U'Piscione Amphitheatre early the next morning. For our last attempt we'd have to reconsider our bellicose ambitions and choose a somewhat softer route line.

We set off hesitant and uncertain, but then as we gained height we finally began to interpret this face, stumbling across pleasant surprises, such as comfortable belays, beautiful starts to the next pitches and splendid threads. The rock continued to be good quality and remained overhanging, while the difficulties never became excessive. And so, after two pleasant days of climbing, we reached the top of the face to enjoy the spectacular views onto the Amalfi coastline.

Usually during a one-week climbing blitz we spend a day resting, unfortunately this time though we'd had that false start and so the next day, instead of the deserved dip in this splendid, warm sea, as true climbaholics we went off to free the route! We invited Cristiano to join us for the redpoint and he accepted with enthusiasm and, between one joke and the next, we spent the last day of our holidays climbing together, totally carefree.

Due to the people we met, the welcoming hospitality and the privilege of being in this environment, the route name came about spontaneously: "Benvenuti al sud", welcome to the South.


17/11/2008 - Climbing at Positano, Amalfi coast, Italy
Climbers have whispered about the sport climbing potential on the enchanting Amalfi Coast for many years. Cristiano Bacci now reveals the secrets around Montepertuso, close to Positano.