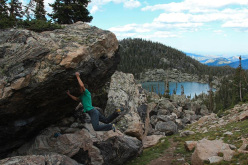 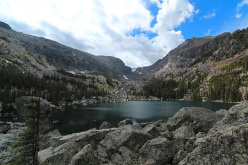 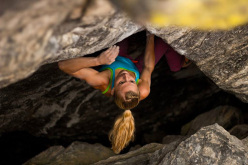 Jorg Verhoeven and Katharina Saurwein, currently touring the Rocky Mountains National Park where the Dutchman recently sent The Wheel Of Chaos V14 (8B+) and the Austrian repeated Riddles in the Park V12 (8A+), provide insight into one of the most famous bouldering areas in the USA.

Boulder, Colorado, the epicenter of American climbing. This small town close to Denver at the foot of the Rockies attracts many of America's rock climbing stars: from Lynn Hill to Alex Puccio, Daniel Woods, Paul Robinson and Dave Graham, the list is long. The reason for this is its nearly perfect setting close to superb rock climbing, bouldering and alpine climbing areas.

Amongst these, arguably the most famous of all is the 'Rocky Mountain National Park', known to climbers more simply as 'RMNP'. This National Park sits above the tourist village Estes Park, about an hour from Boulder, and is loved by hikers, wildlife lovers, alpinists and possibly most of all by boulderers.

In the late 90's a young Tommy Caldwell (Mr. Yosemite himself) was inspired by his father to take a closer look at this place. Caldwell seniore usually went fishing there and had noticed the huge amount of enormous boulders lying everywhere. Tommy went up to Chaos Canyon and discovered an immense potential for bouldering above and around Lake Haiyaha. He started developing the area, but it took Dave Graham to make this place as famous amongst climbers as it is nowadays. Dave saw something hidden to most other climbers: endless possibilities for boulder problems on superb rock. His development of the area received large media coverage and in just a few year RMNP developed into one of America's most important bouldering areas.

Climbing history is constantly being written in the Park, such as when Angie Paine became the first women ever to climbs an 8B (V13) problem by sending the crimpy testpiece 'The Automator'. Daniel Woods joined forces with Graham to put up the hardest boulders in America (arguably in the world), and he crowned his work with the first ascent of 'Hypnotized Minds', graded 8C (V15) but, according to many of the worlds' strongest climbers, the hardest they have ever attempted.

Nowadays 'the Park' is the number one spot for Colorado's boulderers to go to, and in between the tourists and wildlife fanatics climbers are easily recognizable for their fast pace up the scenic trail, and their annoyed answers to the ever recurring question: 'What's that big case you're carrying up?'

The Park owes much of its fame to the beautiful scenery and its, generally speaking, friendly weather. The hike up to Chaos Canyon varies from 30 minutes to over 2 hours, depending which the area you go to, and since the area lies at around 3000 meters (!), its pretty tough on newcomers and locals alike. But the path is well made and passes several alpine lakes and scenic views.

What remains to be said is that the majority of the boulders are between 7A - 8B, and that there are very few 'easy' problems. The style of climbing and the type of rock (beautifully striped gneiss) is sometimes fairly similar to gym-climbing, meaning that bouldering is easily accessible to a lot of climbers.

A good time to visit is summer and fall; in spring and early summer some problems are buried below meters of snow. To get there fly to Denver, and stay in Boulder, since Estes Park can be really expensive. It's nice to have a car, but as soon as you've reached the Park shuttle busses take you everywhere.

by Jorg Verhoeven and Katharina Saurwein