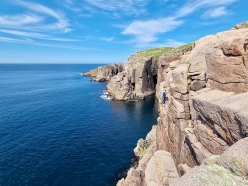 Rock climbing on Gola Island, Ireland. This island is one of the epicentre of the Donegal climbing scene with well over 200 single pitch routes from Diff to E5 on the pristine granite sea cliffs and inland outcrops scattered throughout the island.
Photo by Iain Miller archive 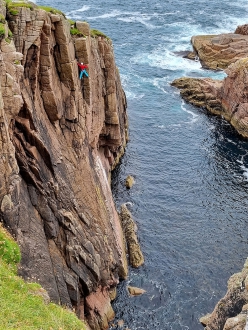 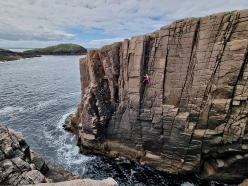 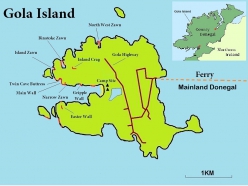 Iain Miller introduces the rock climbing on Gola Island in Ireland. This island is one of the epicentre of the Donegal trad climbing scene with well over 200 single pitch routes from Diff to E5 on the pristine granite sea cliffs.

Living just off the coast of western Donegal is Gola Island. This island is one of the epicentre of the Donegal climbing scene with well over 200 single pitch routes from Diff to E5 on the pristine granite sea cliffs and inland outcrops scattered throughout the island. In the main, the rock is immaculate sea-washed granite with only some of the more sheltered zawns containing sections of loose and crumbly leached rock. As a general rule, the best of the climbing on Gola Island is in the VS to E2 (5.8 to 5.11 USA or 5c to 6b French) grade range.

What Gola Island provides is outstanding sea cliff climbing in a wild, remote and truly beautiful setting. The island sits far out in County Donegal's rainshadow and it is not unusual to be climbing on the island in bright sunshine and blue skies whilst the rest of the county is under a deluge of heavy rain.

Gola Island Rock Climbing History
The potential on Gola Island was discovered in the eighties but it took another decade before the island took centre stage inspired by an Irish Mountain Log article by Alan Tees. In the five years that followed several hundred routes were recorded on its sea-washed granite walls.In 2011 Stephen Read discovered and developed Easter Wall, giving Gola a second inland crag. Current development on Gola is a slow steady stream of harder quality lines from visiting climbers. Gola is a popular venue with university groups and climbing clubs.

Logistics of Gola Island
On your first visit to the island, the best way to orientate yourself to the location of all the crags is to walk from the lake to the top of the main walls. This will give you an excellent overview of Gola and from here it is possible to see almost all the climbing locations on the island.

Most of the crags have very convenient ledges at just about the high-water mark. Check the tide times prior to arriving on Gola and aim to be climbing around low water for the best routes selection.

Getting there
The daily Gola ferry service is run by Sabba Curran (+353 (0) 872245881) and as the Gola pier is tidal it is always best to give him a call to book a sailing prior to leaving home.

Accommodation
By far the best place to stay on the island is to wild camp between the Loch and the sandy beach at the head of the huge sea inlet on the western side of the island, this campsite allows an easy 10-minute walk to all the islands climbing locations and provides an outstanding place to wake up on a summer’s morning.

There are of course several houses available to rent through the main renting sites and this will be blessing if the midgies are out on the island during your stay.

Bad Weather
Alas the west coast of Ireland is quite prone to wet and grim weather. A much easier island to access, which does not require the use of a ferry service, kayaking or camping, is Cruit Island. Cruit Island offers the same excellent granite sea cliff climbing (on slightly lower sea cliffs) and is better sheltered from big sea swells than most of the crags on Gola Island.

05.05.2020
Sea stacks in Donegal, Ireland, climbed by Will Gadd and Iain Miller
Last summer Canada’s Will Gadd teamed up with Iain Miller to make a series of first ascents of some trad climbs on sea stacks in Ireland. These include Chaos Stack, reputed to be the last big unclimbed sea stack just off the coast of Donegal.

12.03.2020
Inis Mór: wild trad climbing in Ireland
The video of the trad climbing potential on the island of Inis Mór in Ireland, featuring Steve McClure and Ricky Bell.