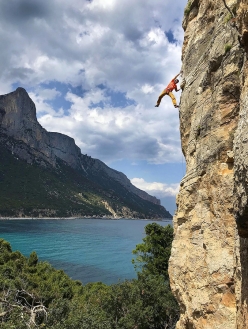 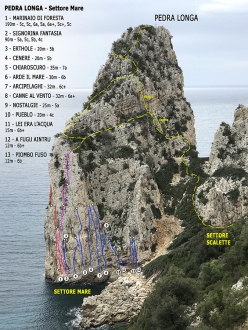 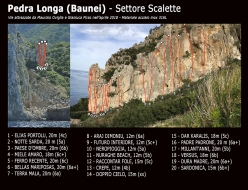 Sport climbing in Sardinia: two new sectors have been developed at Pedra Longa, financed by the Municipality of Baunei and bolted by Maurizio Oviglia and Gianluca Piras.

Between 2017 and 2018 two new sports climbing sectors were developed on the northern side of Pedra Longa (Baunei). These sectors join the previously bolted multi-pitch routes and increase therefore the number of rock climbs close to this small mountain village.

The two crags were developed thanks to a project Maurizio Oviglia presented to the Municipality of Baunei more than 7 years ago. The aim was to encourage the creation of new crags suitable for beginners in places of particular beauty and popular with tourists, in order to combine sea side holidaying with rock climbing.

After an extremely long bureaucratic process and after having received all the necessary authorisation fro the environmental bodies, the project finally moved on to its executive stage at the end of 2017 and the two crags were bolted during the winter and spring by Maurizio Oviglia. Gianluca Piras helped clean and bolt the Scalette sector.

The two new crags are located close to the parking lot and to the sea, the bolts have been placed particularly close and are of corrosion-resistant steel. The sea-facing climbs are equipped with 12 mm Petzl expansion bolts, while the Scalette sector is equipped with 316L steel resined anchors, bolted close by for increased safety. The climbs close to the sea have triple-bolts at the belays.

The sectors can be visited all year round, even in summer as they are in the shade until 13:00 and after 18:00. At the foot of the cliff you can swim and dive, while opposite the climbs the Pedra Longa restaurant serves food and drink all day long. In short, an open-air sports facility with all the amenities you could wish for!

The route descriptions and the warnings about how to go about using the area can be found on the Baunei tourist board website: www.turismobaunei.eu

13.03.2017
Pedra Longa in Sardinia / The Spigolo dell'Ospitalità rock climb
The multi-pitch rock climb Spigolo dell’Ospitalità was first ascended in 1982 by Umberto Marampon up the beautiful Pedra Longa tower in Sardinia. Maurizio Oviglia and Fabio Erriu recently made a rare, possibly even first, repeat of this climb above the coast of Baunei.

31.05.2013
Monte Santu, Baunei, Sardinia. Two new routes by Larcher & Oviglia and Giupponi & Sartori
Two new 8a multi-pitch climbs on Monte Santu, Baunei, one of the last virgin crags in Sardinia: Vertigine Blu" (275m, 8a max, 7a+ obl.) established by Luca Giupponi and Nicola Sartori and "Blu Oltremare" (315m, 8a max, 7b obl.) established by Rolando Larcher and Maurizio Oviglia. Both climbs were established ground-up from on 14/16 and 18 May 2013 and then redpointed on 20/05/2013. The report by Maurizio Oviglia.