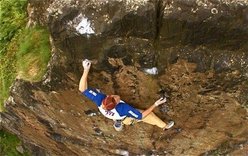 Sonnie Trotter from Canada has just made the coveted second ascent of Rhapsody, Dave MacLeod's E11 at Dumbarton Rock, Scotland. Trotter sent the line after a month-long siege during which he fought hard against the fickle local weather and the technical difficulties of the route which resulted in 24 fifty foot falls prior to yesterday's ascent.

Rhapsody was first ascended by Dave Macleod in April 2006 and shot to fame for being the first route to break Britain's legendary E10 barrier. Trotter travelled all the way from Canada with the sole intention of repeating the line and, with success close but still elusive, even rebooked his flight home for a week before following the original Rhapsody sequence hold for hold to the top. During his stay Trotter also established an easier left-hand finish called Direquiem, for which he proposed 5.14a R.

Trotter's blog report reads as follows:
"...It was cloudy and windy today, the sort of conditions that make for a shitty family picnic, but not a single midge in sight, ideal sending temps, the tiny crimps felt like, well, tiny crimps, but somehow I stayed on. I nearly fell from the top, my foot slipped, then my hand, Cory yelled, it was desperate, but then I fell into a place of power that I have not been to for a while, I squeezed tighter and knew it was over, a truck could not have pulled me off. On top, I stood on cloud nine. I still am. Cloud ten maybe even, if there is such a thing."