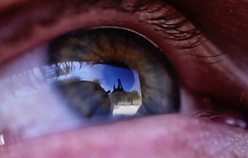 Beauty is in the eye of the beholder: Ba-Chikele, Chad
Photo by Camp 4 Collective

The video clip of some of the recent works of American alpinist and filmmaker Renan Ozturk.

Almost 40,000 views in the first two days can't be wrong... here's a great clip by Renan Ozturk, the American alpinist and filmmaker who continues to surprise and inspire with his visions and art. The clip summarises some important moments in the last few years, such as on Meru (for which he received nomination for the 2012 Piolet d'Or together with Conrad Anker and Jimmy Chin), in Alaska with Freddie Wilkinson, with Guido Perrini and Xavier De Le Rue in the Antarctic, of the desert towers in Chad with James Pearson, on the granite of Yosemite, high above the sea Deep Water Soloing con Alex Honnold.