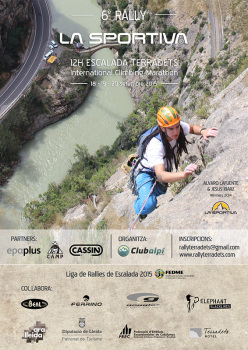 From 18 - 20 September 2015 the 6th Rally La Sportiva and 12th Climbing Terradets, the international rock climbing marathon at Terradets in Spain.

For those who haven't heard of Terradets, it’s a deep and narrow canyon located circa 2.5 hours west of Barcellona with impressive limestone walls up to 500m in height, long considered one of jewels in the crown of Spain’s rich climbing assortment. The most famous sports crag - Les Bruixes - is a absolute reference point for cutting-edge sports climbs, but the long multi-pitch routes are just as fascinating and it for years these have hosted the international climbing marathon. The rules are simple: climb as much as possible in 12 hours on route which, as always, have a points system based on their grades.

The aim of the meeting is just as simple: meet and have fun with other climbers worldwide. As, for example, Sinisa Skalec and Sinisa Alavanja, the two winners of the climbing meeting in Croatia’s Paklenica who’ll join other international teams such as team Camp-Cassin climbers Yann Borgnet and Anaïs Apioupiou, as well as La Sportiva climbers Martin Berta, Maria Benach, Lluc Macia, Luis Alfonso Felix, Dani Fuertes, Alvaro Lafuente, David Palmada "Pelut" and Ander Lasagabaster. Other participants include Russian alpinist Ivan Témerev who will premier his film film "Siberia, ice climbing in the far frontier".

For organisational reasons participation is limited to 35 climbing teams. For further information visit www.rallyterradets.com or write to: rallyterradets@gmail.com