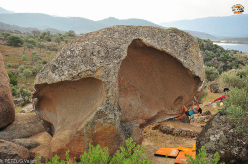 The fifth and penultimate video of the Petzl RocTrip 2014 documenting the climbing around Bafa Lake in Turkey.

An ocean of boulder problems dotted around Lake Bafa, in western Turkey. A myriad of huge granite and gneiss boulders that have rolled down from Mount Atmos, just waiting to be climbed in this enchanting setting. These are the words used to describe this magnificent bouldering area that last October hosted a stage of the Petzl RocTrip 2014.