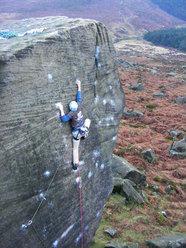 On 05/01/2008 Pete Whittaker made the first ascent of "Grandad's Slab" E7 6c on the gritstone Burbage South, England.

On 5 January Pete Whittaker carried out the first ascent of "Grandad's Slab", a direct finish to "The Braille Trail" at Burbage South, England. The route weighs in at E7 6c and climbs a series of pebbles and rockovers instead of breaking right for the Braille Trail arête which Whittaker had impressively repeated in May 2007 at just 16 years of age.

Sincere congratulations to young Pete. In truth though Grandad's Slab has a peculiar history: Johnny Dawes (first ascentionist also of The Braille Trail way back in 1984) had previously climbed the line on top rope but never returned for the lead. What makes Dawes' ascent remarkable is that he had climbed it, at British 7a, with his right hand only!

Those in the know are well aware that Dawes, in search of different vertical horizons, was no newcomer to such tricks: at the Roaches he had toproped Obsession Fatale E8 6c without hands... at Millstone he climbed Master's Edge E7 6c with his right hand only ... and at Froggatt he soloed Downhill Racer with just his right hand. E8 6c instead of the original E4 6b, on-sight!