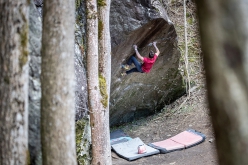 20-year-old Nicolai Užnik has repeated Bügeleisen sit, at 8C the hardest boulder problem in Austria’s Maltatal and one of the purest lines out there. Th iron-like bloc was established with a stand start in 2001 by Klem Loskot, while in 2014 Finland’s Nalle Hukkataival added the sit start to create one of the hardest problems in the world at the time. Jakob Schubert repeated it in 2015, Stefan Scarperi followed suit in March this year.

Youth competitions aside, Užnik is not a household name as yet but his convincing win in September of the 2020 Austrian senior Bouldering Championship demonstrated that he is a force to reckoned with. He started trying the problem in summer and after battling against adverse conditions - and having to clean the topout of snow - yesterday proved to be his day. This is Užnik’s first 8C and follows various 8B+ including Hide and Sick, Bügeleisen and The Source in Maltatal, Traumschiff in Zillertal and Panthera at Flatanger

02.03.2020
Stefan Scarperi flashes 8B and repeats Bügeleisen 8B+ in Maltatal
During a three-day bouldering stint in Austria’s Maltatal, Stefan Scarperi has sent a handful of testpieces: Bügeleisen 8B+ and Emotional Landscapes stand 8B, as well as a flash ascent of Wrestling with an alligator 8B. All these boulder problems were established by Klem Loskot around the new millennium. Scarperi reports.