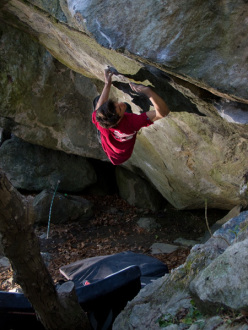 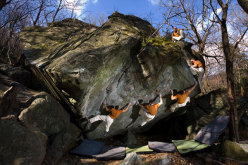 Italian boulderer Niccolò Ceria has made the fourth ascent of Gioia at Varazze, the boulder problem established by Christian Core in 2008, graded 8C+ and hitherto repeated by only Adam Ondra and Nalle Hukkataival.

After Ephyra 8C+ at Chironico and Dreamtime 8C at Cresciano, 27-year-old Niccolò Ceria from Biella, Italy, has repeated another of the most famous and difficult boulder problems in the world, Gioia in the forest above Varazze in Liguria. The masterpiece was first ascended by local Christian Core in 2008, and for over a decade it has served as a reference point for the upper extreme. Currently there is only one problem half a letter grade harder, Nalle Hukkataival’s Burden of Dreams, graded 9A and awaiting confirmation.

Although many of world’s premier boulderers have attempted to link the 14 moves that traverse the Gioia block from left to right, in the past the difficult sit start foiled everyone except Adam Ondra in 2011 (who upgraded the line from 8C to 8C+) and Nalle Hukkataival in 2014. Early on Monday Niky Ceria stuck the crux and topped the problem doing without the kneebar discovered a few years ago but, instead, using a new starting sequence.

Ceria had repeated Gioia's stand start in 2009 but at the time the sit start felt out of his league. In 2015 a team of top American climbers discovered a kneebar and Ceria then invested two days attempting the problem, during which he figured out a new starting sequence that suited his style even more.

"Initially I tried with the kneepad but I couldn’t do it, while on my second day I managed to make it work" Ceria told planetmountain.com, adding "but even though I consider it an interesting option, I preferred not to use the kneebar for this problem so linked intrinsically to Christian. So, although I’d chosen not to use the kneebar and the original sequence felt too hard, I decided to spend some time seeing if I could discover a sequence that would suit me."

Ceria’s solution adds 3 moves to the start which, despite being hard, are less dependent on conditions. After refreshing his memory and trying the moves last Friday, on Monday morning he made the send.

It’s worth underlining that only a few months ago Ceria stopped doing what he loves most, namely discovering new boulders, and decided to concentrate of repeating some existing problems. While waiting for his new visions, here’s the video of his ascent.

06.12.2011
Adam Ondra repeats Gioia 8C+ at Varazze
Adam Ondra has made the first repeat of Gioia at Varazze in Italy, the 8C+ boulder problem freed by Christian Core in 2008.

07.12.2011
Adam Ondra, the pure Gioia interview
Interview with Adam Ondra after the first repeat of Gioia 8C+ at Varazze, Italy.