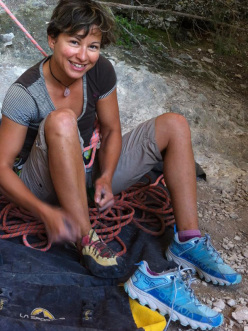 Muriel Sarkany climbs 9a at the Gorges du Loup

Belgian rock climber Muriel Sarkany has climbed her first 9a, Punt-X at the Gorges du Loup in France.

After retiring from competitions Sarkany continued climbing unperturbed at excellent standards and, in truth, somewhat under the radar. In 2011 Sarkany climbed three 8c's and in 2012 she sent a further two 8c's and her first 8c+, Ultimate Sacrifice at Gorges du Loup in France. Not content, she then laid hands on Punt-X, the 9a nearby put up by Frances' Alexandre Chabot, but this quickly got wet and she was forced to change plans. With a further two 8c's under her belt this year the time was ipe to take things one stage further, too, and she returned in August to start working the line, but it was only this October, with reduced temperatures, that she started putting in some proper attempts. Yesterday she finally came up trumps and her comment, "I'm so happy!!!!!!!!!!" speaks a thousand words.

It goes without saying that Sarkany joins only a handful of female climbers who have sent 9a, first achieved by Spain's Josune Bereziartu in 2002 with her redpoint of Bain de Sang in Switzerland.