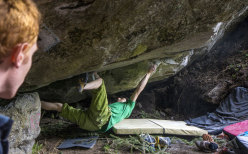 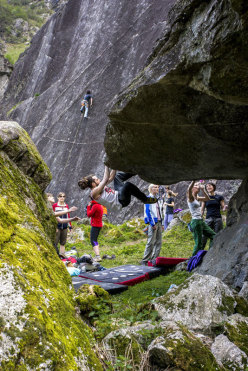 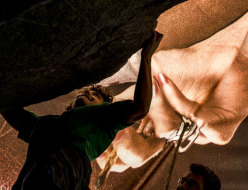 MELLOBLOCCO 2013
When: 26 April - 5 May 2013
Where: Val di Mello / Val Masino (Valtellina, Sondrio, Italy)
What: the world's biggest bouldering meeting
Who: for all those who love bouldering, from across the globe
What for: climb the numerous boulders and valley rock faces
Organisation: Associazione Operatori Val Masino

04/05/2013. 2000 climbers had registered on the penultimate day of Melloblocco and the number is expected to grow even further. Today everyone got some great climbing done beneath a gorgeous blue sky. Many problems were sent. Expectations are high now for tonight's big party which paves the way for tomorrow's grand finale.

With the sun shining, Melloblocco flies. There are now more than 2,000 registered climbers here in Val Masino - Val di Mello, and many more will still come. All the while, up high, the Pizzi di Ferro reflected brightly in the spring snows. But what should one do at Mello on a day like this? Go climbing, of course. Send problems, more problems than ever before. And also climb the classic valley slabs. In short, one dabbles in beauty.

And so it happened that on the splendid mirror-like granite slabs of routes such as Stomaco Peloso and Nuova dimensione, and even higher still, plenty of 10's appeared... the number and symbol printed on this year's decade-old Mello T-shirts. These t-shirts could be seen everyone within the valley, around and above all on the boulders themselves. And while everyone was busying away, the Iris garden (belonging to the Mountain Centre) and the entire Mello Village, the true focal point around which everything revolves, experienced moments of calm happiness, with music, meetings and relaxed smiles.

What is certain is that, one problem after the next, loads of climbers really let loose. So much so that, by now, it's almost impossible to track all the problems that were sent. News of each ascent echoed across the valley walls and bounced from each boulder. Unsurprisingly so, since the best climbers in the world had reached the valley for this occasion. So much so that it's perhaps easier to list who wasn't there. All the best Italians were these. And while Gabriele Moroni flashed Brown Sugar, Silvio Reffo replied with his "first shot" up Climb for life man. The same problem was then sent by Riccardo Caprasecca and Giulio Bertola as well as Colombia's Christian Aristizabal Serna and Marco Erspamer. Youngest phenomena made their appearance, too, and both Maschio dominante and Nona misura naturale were sent by Stefano Carnati: the boy is a mere 14 years old... and undoubtedly promises well for the future!

But out among the problems these was also Stefano Ghisolfi on firing form, as well as Michele Caminati who got off to a great start, along with England's James Pearson, Italy's Enrico Baistrocchi and Jacopo Larcher, Finland's Nalle Hukkataival and the (unleashed) American Dave Graham who, apart from sending the problems, has now become the official Melloblocco DJ. For his part, young French champion Enzo Oddo continued his quiet quest, solving one problem after the next and also enjoying life and the beautiful landscape. It comes as no surprise that he was seen in Val di Mello asking for information while showing what he described as the '"Artistic Map" of Mello. The boy has certainly styled in with Mello and the valley. Is this why he returned?

Talking about returning to the valley: Jenny Lavarda's comeback was awesome. The champion Italian climber was "racing" well catch up with ever-smiling Barbara Zangerl (who has by now become a reference point of this Melloblocco) and with the determined Yulia Abramchuk. France's Caroline Ciavaldini is worth mentioning, too, and she continued to send one problem after the next. There were plenty of other protagonists taking part in this great game: Italy's Anna Borella, Roberta Longo and Sara Morandi and France's Anne Laure Chevrier and Caroline Sinno as well. Yes, these Mello girls were one of the event's real elusive beauties. Just as beautiful as the thousands of Melloblockers who have taken part in Melloblocco for the last 9 days.

These very same boys and girls who, before and after their climbing today, took part in the Climb for Life and Lombardy's ADMO. They listened attentively, asked questions and then, consented to their saliva being removed, examined and tissue typed to become potential bone marrow donors. What rendered this moment special was that it happened completely spontaneously, no special advertising was needed. A simple yes was uttered, by the entire climbing community, by all of Melloblocco.

After a busy day climbing the Melloblockers are now getting ready gearing up for Saturday's classic party. The program includes an incredible video session with the world premiere of Dave Graham's highly anticipated video, as well as the first screening on the No Spain Trip by Gabriele Moroni and Silvio Reffo and the back-stage of Adam Ondra's film Change. Then there'll be the concert with Circo Abusivo: it'll be an "explosion" of music, happiness and all the rest.

Tomorrow the program continues with the grand finale of this 10th Melloblocco... and the climbing will continue.