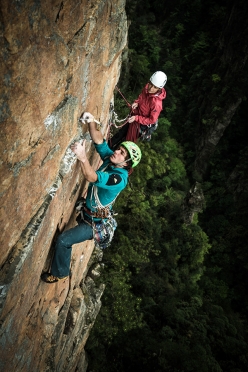 In April 2016, an international team of climbers comprised of Mayan Smith-Gobat, Ben Rueck, Liu Yongbang (Abond) and Xiao Ting was the first to receive permission to climb in Zhangjiajie, China’s first and largest National Forest Park in China. This stunning UNESCO World Heritage site located in the northern Hunan province attracts over 30 million visitors per year, yet despite its long history the strict park regulations had previously prevented climbers from exploring Zhangjiajie’s maze of 3,000 unique orange sandstone towers.

During their month-long stay in the valley, Smith-Gobat and Rueck focused on two of the highest towers and succeeded in two ground-up first ascents of these 300m walls, the highlight being the Dragon’s Nest (5.13a).