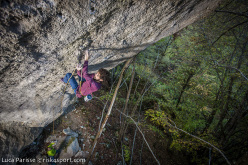 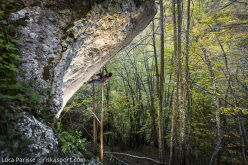 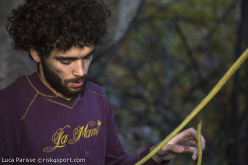 At Roccamorice in Abruzzo, Italy, Matteo Cittadini has made the first repeat of Hole's Trilogy 8c.

Italian climber Matteo Cittadini has carried out the first repeat of Hole's Trilogy, the route freed last summer by Mauro Calibani at Roccamorice in Abruzzo and formerly known as "La trilogia per il successo". The route follows a series of sharp pockets up a beautiful 50° overhanging boulder in the San Spirito valley. This is 23-year-old Cittadini's first 8c.

Fantastic! Firstly because I've been privileged to make the first repeat of a route freed by Mauro Calibani, a name ... a guarantee. And secondly because climbing a row of pockets up this 50° limestone boulder, created perfectly by Mother Nature, is a true gift for us climbers.

I saw the video of Mauro so I had an advantage, the moves had already been unraveled, all I had to do was put them into practice and adapt them to my size as I'm slightly taller.

I'm not a great fan of numerous redpoint attempts because I believe a climber's ability should be measured by just a few attempts, not after months of trying, and this explains why in my climbing CV there aren't many 8c's... the result of school drilling. This season I managed to flash a series of 8a's and climb a couple of 8b's after 4 attempts, so I felt ready for my first 8c!

The choice was obvious, I wanted a route that wasn't too long and that was natural so I opted for "The trilogy for success"... It immediately suited my style of climbing, unfortunately though the pockets were sharp and didn't allow me to make more than one attempt each day. I made the hour and a half drive to "put in the effort" and got really angry when, on my second attempt, I fell right beneath the chain off a precarious cross-over move, but I can assure you it was worth trying again. My excitement and scream of joy, are the proof.

A big thank you those who bolted and climbed the route and obviously to my belayers "Fabrizio and Rischio"!


"When the going gets tough, the tough get going"