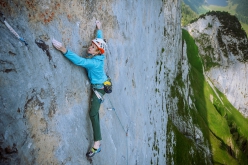 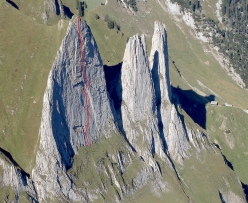 The route line of 'Parzival' (8b, 150m), Westliche Dreifaltigkeit, Alpsteingebirge, established by Markus Hutter, Fabio Lupo and Michael Obendrauf and freed on 21/05/2017 by Michael Wohlleben
Photo by Frank Kretschmann

Matilda Söderlund from Sweden is best known for her supremely difficult sport climbs, having made a name for herself in 2012 and 2013 with flash ascents of two 8b+ and redpoints up to 8c+. After recovering from a finger injury and concentrating on her university studies, in 2019 she celebrated a return to form by redpointing the ferocious 9a The Elder Statesman in Germany’s Frankenjura, while in 2020 she sent her first 8B boulder, Armstrong assis at Nockeby in Sweden.

The 29-year-old has now taken her climbing one stage further and climbed her first-ever multi-pitch, the 6-pitch 8b Parzival on the smooth Westliche Dreifaltigkeit slab in Switzerland’s Alpsteingebirge. The route was established ground-up straight through the center of the face by Markus Hutter, Fabio Lupo and Michael Obendrauf and freed in May 2017 by Germany’s Michael Wohlleben. The climbing is highly technical and the difficulties check in as follows: 7a+, 7b, 7b+, 7c+, 8b, 7c, 7a+  .

Söderlund worked the route briefly then, after waiting for stormy weather to abide, she sent the route in crisp conditions, managing to redpoint all pitches without ever falling. "Reaching the summit of my first multi pitch project was almost a surreal feeling" explained Söderlund, who certainly plans other climbs of this calibre in the future. Belayed by Mats Nilsson, Söderlund was cheered on during her ascent by Wohlleben who happened to be working his new project nearby.