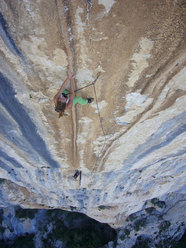 Martina Cufar has made the 4th ascent of Tom et je ris 8b+, Verdon Gorge, France.

A few days ago Martina Cufar from Slovenia carried out the 4th ascent of the beautiful "Tom et je ris", a 60m journey up what Martina describes as the "most magnificent tufa in the Verdon." First ascended by local Bruno Clement, the extremely exposed line starts from a cave and is reached via abseil, like the vast majority of routes in the Gorge.

Climbing in the company of Spanish friend Mariona Marti, the lead World Champion 2001 checked out the moves shortly one morning and, after a rest day, unexpectedly sent the line second-go a day later. Fighting against complete exhaustion Martina skipped the clip through the crux moves, as in cases like these "it doesn't make a big difference if you fall 15m or 20m..."

While waiting for Triay's video footage of Cufar and Marti, enjoy a clip from his "The Fanatic Search"