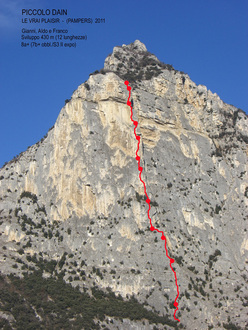 After Mister Magoo which in 2008 explored the left-hand side of Piccolo Dain in Valle del Sarca, now it's the central section of this massive face which has received the attention of Gianni Canale, Aldo Mazzotti and Franco Cavallaro who last autumn established Le Vrai Plaisir - (Pampers). The 430m climb was forged ground-up and at present this is certainly one of the hardest on the rock face, with difficulties up to 8a+, obligatory 7c climbing and long run-outs.

"The idea behind this line" Canale told Planetmountain, "came about during an attempt on the nearby route Ultima Fiamma established by Tiziano Buccella, Rolando Larcher and Geremia Vergoni in 2007. This elegant line and the rock quality motivated us to check out what would then become our new project! And so, after numerous battles, in autumn 2011 we completed our masterpiece. It's certainly a full grade harder (both technically and psychologically) than its nearby sister La Tigre, il Daino e il Gladiatore which was established, just like this one, together with Aldo Mazzotti and Franco Cavallaro in 2010 on the nearby Limarò face."

Canale concludes "The final 8a+ pitch is fantastic. 30 overhanging meters, continuous and with no rests. The route is very difficult as it never lets up, but for those in search of an adrenaline buzz it's perfect. We recommend a good dose of technical ability and courage. Have fun!"