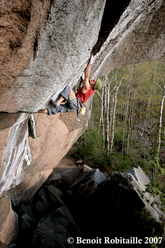 On May 12 Jean-Pierre Ouellet redpointed La Zébrée 8b+ at Mont-King, Canada, placing all the gear except the first piece on lead.

Remember La Zébrée, the 8b+ trad route in Canada's Mont-King climbed by Jean-François Beaulieu in 2004 and hailed as one of America's hardest cracklines? At the time Jean-François climbed the mammoth crack pinkpoint, knowing full-well that the next step would be to climb the route placing the gear on the lead. Well, on May 12 his climbing partner Jean-Pierre Ouellet upped the ante and led the whole pitch, placing all the gear as he went bar the first piece to avoid the rope drag and weird landing.

Jean-Pierre estimates to have attempted the route between 50-60 times prior to the successful ascent, removing the gear from the wildly steep line after each attempt. That's determination for you! While Jean-Pierre searches for a new project this season, check out his full report below:


La ZÃ©brÃ©e 8b+ Mont-King, Canada by Jean-Pierre Ouellet
I'd been working the route for the last 3 years. The first season I worked the route for a lot. It took a long time to figure out all the "beta"... Not so much the climbing beta, but mostly the cleaning beta... As you probably know the route is almost always wet. So every day that I wanted to try the route, I had to dry it out with towels and sponges... Some days it would take up to 5 hours to clean the crack... yeah I know I'm crazy... But if you'd see this crack in person, you would do the same... It is by far the best looking route I've ever seen... I've seen a lot of cracks in N. America and La Zebree makes Sphinx Crack, Phoenix and everything in Indian Creek look like a pile. The second season it rained so much that the route was seeping badly and I wasn't able to dry it completely.

The route is very steep, has two roofs and leans quite to the left. Very weird angle. It's 25 meters long and overhangs for about 13 meters. Since I wanted to climb the route placing the gear I also had to figure out a way to clean the gear... You can't just rap and clean (like you would do on Sphinx or Phoenix...). So I had to down aid to some in-situ nuts (which I did not clip when leading) after every try and then swing and pull while lowering to clean the whole thing. Quite tiring...

I probably attempted the route 50-60 time over 3 years. I did it on my 10th try this season. I trained at the Red for 3 weeks before realizing that it had not rained for 10 days at Val David... So I sprinted back home to start try it. I felt pretty strong and the route was exceptionally dry (although on the first day I still had to clean it for 5 hours, and 2 the next morning).

I preplaced the first piece because the landing is pretty weird and the rope would get caught in the first roof when I tried to place the gear low in the first section... You could do the first roof with a 2nd rope and you could drop it after you pass it ... But I had enough work trying to keep the route dry every day and cleaning the gear after every try...

La ZÃ©brÃ©e is located in Val-David, one of the best traditional climbing crag in Quebec. The granite is really solid and textured. It is about 1 hour north on Montreal. The best season is mid-august to late-October. Mt King is the best sector and in my opinion has 2 of the best cracks climb in the world, La Zebree and Le Toit de Ben. Le Toit de Ben is a 5.13a (7c+) 10m roof crack. It's like Separate Reality but longer, harder and better. Both routes are very unique!