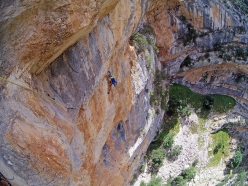 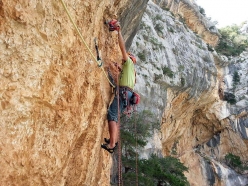 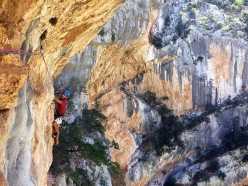 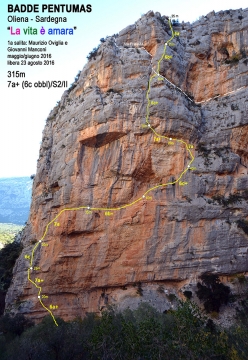 The appearance of bolts on big walls has led to the emergence of a kind of sport routes loosely defined as "multipitches". Most tackle the compact sections of a rock face, avoided in the past by previous first ascentionists. Initially routes climbed slabs, but then slowly but surely even the most repulsive-looking overhangs were breached. Obviously with the use of bolts, even when drilled ground-up, being able to breach a section or not depends on the rules and ethics the first ascentionist wishes to adhere to, or the tools of the trade he or she uses, such as hand drilled bolts or an electric drill. Leaving these ethical issues to one side, I’dlike point out that one of the criteria used to judge the beauty of a route was its linearity. A line that zig zags, that follows the lines of weakness, up corners and cracks, along ledges, has always been associated with traditional routes. Modern climbs, by contrast, are ideally as straight as possible, following the line a waterdrop would take falling from the summit, without any escaping left or right. Which means that traverses, so typical of older routes, disappear altogether on modern routes and are largely replaced by straight, parallel running lines.

After years of establishing modern routes according to this style, at least here in Sardiniawhere I live, I decided to only establish routes I deemed very special or beautiful… in short, different from those I’ve done in the past.

Badde Pentumas is a gorge located in the Oliena Supramonte massif, in the Lanaitto Valley. hugely popular for canyoning and, more recently, for its via ferrata, it is less well known to climbers. Yet the steep wall concealed inside, close to ùnchinos, struck me right away, making me dream about a direct line through its bulging overhangs.

After spending much time spent scrutinizing every fold of the wall, crossed up high by the via ferrata as it happens, I realized i was confronted by a complex problem which couldn’t be solved easily. All possible lines I had identified had big question marks, regarding both the rock quality and the probable difficulty of the climbing. Furthermore, the angle wasn’t my favorite and finding points to hang off a skyhook and place a bolt didn’t appear easy!

After plenty of doubts and much beating around the bush, in June I felt ready to try the project I’d been mulling over for the last two years. Giovanni was, as they say, an good partner, someone who’ll go along with whatever you say and never waste your time, yet I knew I’d have to rely on my own strength and expertise. not a minor detail, seeing that the route received the sun at 14:00 and we were in the middle of the Sardinian summer. In short, we’d have to plan many days for the first ascent and we’d need plenty of patience!

After establishing the first pitches I’d studied from below and after having found the answers to my initial questions ... I began to traverse below a section that seemed unclimbable. A spectacular and exposed sideways travese, reminiscent of the Dolomites almost, took us into the heart of the red wall. From here I tried to climb up directly, but was immediately put off… At this point, instead of mounting a bolt latter, I preferred to abseil off. I was faced with two choices: ask for help from stronger climbers, or find another escape. My aim though wasn’t to make a really difficult route, what I wanted was something no harder than 7b/7c! After another fortnight of puzzling and examining photographs we returned to the base. My Plan B was all the more bizarre: an almost 80 meter traverse rightwards, then back left via some bold moves, literally suspended above the huge overhangs, where there seemed to be some holds… The finish remained another question mark. Would this be the key to the entire route? Giving up at that point would have meant complete failure!

Looking at the line of the new route, many of you will smile. It seems anything but the modern bolt route! Yet, as Detassis once said, it is a climb that seeks the "easy within the difficult" up an unclimbed face, so there's some logic in it!After many days of making the first asccent followed by the first free ascent, I can't hide my satisfaction. The climb isn't extreme but in my opinion it's beautiful: different, exciting and never predictable. It includes all styles of climbing, but if you do not like traverses, be warned, go somewhere else! Obviously a first ascentionist can't decree what is or isn't a masterpiece, and obvioulsy people can prefer different styles! But yes, I can say hazard the following: La vita è amara is undoubtedly one of the finest multi-pitches I've ever first ascended!

Note: the direct route remains a dream of mine... but not for long! I needed to share the first ascent with a climber who's stonger than I am on this kind of terrain. So with Luca Giupponi, on a very hot July day, we started to the right of La vita è amara and climbed directly to the big overhangs. A new Hotel Supramonte? We'll see, for now the first three pitches look promising. Work in progress!