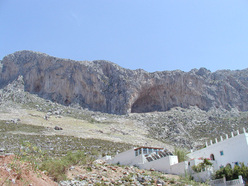 The crags Spartacus, Afternoon, Grande Grotta and Panorama on the island of Kalymnos, Greece.
Photo by Marco Bonfio 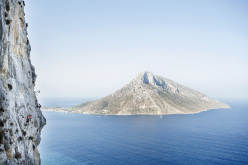 A climber taking part in the Climbing Marathon of the The North Face Kalymnos Climbing Festival 2014. The island of Telendos is clearly visible in the background.
Photo by The North Face ® / Eddie Gianelloni

An EU funded rebolting program has been approved to rebolt circa 250 sport climbs on the Greek island of Kalymnos.

Five years after the last official rebolting program on Kalymnos, the tiny island in Greece’s Aegean sea is now gearing up for a new round of route maintenance. EU funding has been approved for an official rebolting project that will begin this summer and will be completed by the end of the year. Overseen by local expert Aris Theodoropoulos, the project aims to rebolt circa 250 existing routes as well as adding a further 100 new climbs. The following technical details have been published:

Sikati Cave, Irox, some routes at Odyssey, Grande Grotta and Panorama are top of the agenda according to Theodoropoulos who stated on Climbkalymnos "No doubt this rebolting program is a very good thing for Kalymnos, but it will only help to rebolt about 10% of the total routes. And the fact is that funds for rebolting are almost non-existent. Now, more than ever, we must work for the longevity of Kalymnos; besides correcting the routes in need, future climbing development must be done the right way to ensure that Kalymnos remains one of the safest family climbing destinations in the world."

For further details about this, and other, initiatives visit climbkalymnos.com

17/05/2005 - Kalymnos rock climbing in Greece
Rock climbing on Kalymnos in Greece is simply a dream come true! Awesome limestone crags, stunning routes, a relaxed holiday atmosphere, the warm Aegean sea to dip into after a hard day on the rocks, legendary Greek hospitality and cuisine...