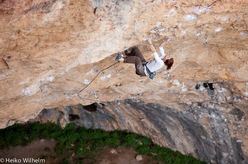 We don't often provide "rock" reports about Johanna Ernst as usually the 19-year old is better associated with Lead competitions and quite rightly so: in 2008 the Austrian won the European Championship and the Lead World Cup, while in 2009 she upped the ante to take home both the World Cup and the World Championship title. In short, in just two years she won everything that was up for grabs.

Ernst's winning streak came to an abrupt end in 2010 after a nasty fall during a bouldering competition in the USA, and while 2011 marked her comeback year (even with two victories: Boulder and Valence), 2012 now promises even better. Confirmation for this comes directly from Spain where during a team training trip to the immense Santa Linya cave she managed to send La Fabellita 8c and her first 8c+, Open your Mind.

While Fabellita was redpointed second go, Open your Mind 8c+ was sent on her fourth attempt. Yes, the Lead World Cup 2012 which will kick off in Chamonix in July promises to be mind-bogglingly difficult!