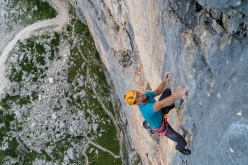 Jernej Kruder making the first free ascent of Ellipsis (8b+, 200m) on Bila Pec at Sella Nevea, Italy. The Slovenian made the first ascent in 2018 with Gašper Pintar and David Debeljak ground-up using a mix of wires, cams, pegs and, where necessary, bolts
Photo by Mark Grmek 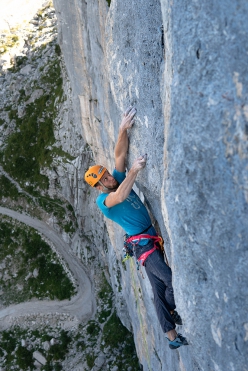 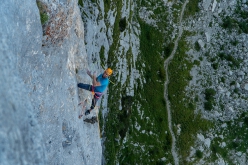 Slovenian climber Jernej Kruder has made the first free ascent of Ellipsis, a five-pitch climb with difficulties up to 8b+ on Mt. Bila Pec at Sella Nevea in the Julian Alps, Italy.

Two years after establishing Ellipsis on the East Face of Bila Pec, the smooth limestone peak located in the magnificent Sella Nevea basin high up in the Italian part of the Julian Alps, Jernej Kruder has now pulled off the route’s first free ascent.

The 5-pitch outing was first ascended by the 29-year-old with fellow Slovenians Gašper Pintar and David Debeljak ground-up using a mix of wires, cams, pegs and, where necessary, bolts. After three days of hard work the 200m line sported a mere 28 bolts, resulting in a difficult physical and psychological test.

Kruder summoned up the courage to return only last week and, making the most of prime conditions with Urh Primožič, he completed the first redpoint. While the first three pitches check in at 7b+, 7a+ and 8a and ran fairly smoothly, the 8b+ crux pitch and in particular the 7c finale made Kruder dig in deep prior to success.

Ellipsis, 8b+ (7b+,7a+,8a,8b+,7c) FA Story begins back in 2018 when I teamed up with strong and visionary guys @pinticlimbs and @slod4ve . They saw a nice looking line in a steep 200 meters wall of Bila pec. They didn't know how difficult and challenging it can be, but they were sure it's not going to be save or possible without bolts. They took the alpine gear and I took the bolts and drilling tool for 3 days of work. We spent 26 (+2 additional ones) bolts including anchors and some pitons. Route seemed very challenging and I needed 2 years to find courage to come back. After 3 days of work, I came back with @urhprimozic on very good, dry conditions. First 3 pithes (7b+, 7a+ and 8a) went down pretty easy, but still I wasn't sure about 4th, hardest pitch. I gave it a go and I failed. I failed because on previous tries I was mentally and physically too tired to figure out the moves properly. This time I found perfect beta and sent it second go . I still had time to finish the last 7c pitch on which I was also missing a move. I must say, I fought the most in this one, but got lucky enough I didn't fall. This was my longest big wall project, and I'm very proud I can call it a first ascent . @pinticlimbs @slod4ve @urhprimozic @sonilmose thanks again for this beautiful story!!! : @markgrmek ______________________ @scarpaspa @ocun.climbing @vibram @snowmonkey

12.05.2020
Jernej Kruder's spring sends in Slovenia
Slovenian rock climber Jernej Kruder has made the first ascent of Peščena ura, a 9a sports climb at the picturesque crag Sopota.

16.04.2019
Slovenians supreme in Russia, Janja Garnbret and Jernej Kruder win Bouldering World Cup in Moscow
The second stage of the Bouldering World Cup 2019 took place in Moscow, Russia, last weekend and was won by the Slovenian climbers Janja Garnbret and Jernej Kruder. The first stage of the Speed World Cup 2019 was won on Friday night by YiLing Song and Bassa Mawem.

14.03.2019
Julia and Jernej Kruder Deep Water Solo climbing at Mallorca
The video of Slovenian siblings Jernej and Julia Kruder DWS climbing on the island of Mallorca in autumn 2018.

02.01.2019
Jernej Kruder climbs Croatia’s hardest, Dugi rat at Omiš
On 31/12/2018 Slovenian climber Jernej Kruder made the first ascent of Dugi rat at the crag Vrulja close to Omiš in Croatia. Graded 9a+, this is now the hardest sport climb in the country.