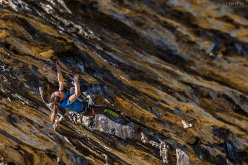 15-year-old Slovenian sport climber Janja Garnbret has onsighted Avatar 8b at Pandora in Croatia. On her second attempt she redpointed the climb Scrat, 8c.

Janja Garnbret from Slovenia has had an outstanding four-day trip to nearby Croatia where she made a remarkable onsight ascent of the 8b Avatar at the steeply overhanging limestone crag Pandora. At a mere 15, Garnbret is undoubtedly one of the most talented of the new generation of Slovenian athletes and her performance is certainly one of the most important onsights of a female climber of her age.

At Pandora Garnbret also made a second-go redpoint of Scrat, her first 8c. During the same trip Garnbret also visited the nearby crag Kompanj where she onsighted Neytiri 8a and redpointed Rocket Max 8b on her second attempt.

Last year Garnbret won both the European Bouldering and Lead Championships of her Youth B category and bearing this in mind it's easy to foresee that she is one of the absolute favourites at the end of August and beginning of September when Arco hosts the IFSC Youth World Climbing Championships.