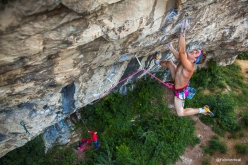 A climbing movie by James Pearson, featuring the British climber’s efforts to repeat the historic 8c+ sports climb Bronx at Orgon, freed by François Petit in 1994.

This climbing video tells the story of James Pearson’s repeat of the Bronx at Orgon last year. Pearson playfully refers to Le Bronx as "a masterpiece, truly visionary, with only 3 natural holds out of 30…" referring to how sometimes routes from this era were created artificially, rather than simply bolted. Indeed, its moves posed a level of stamina and endurance hitherto unseen of , ideal for outside training prior to indoor competitions, yet after being freed by François Petit in 1994 the climb, its neighbors such as Macumba Club 8c and La connexion 8c+ and that butttress above the Orgon canal soon fell out of fashion and were almost completely forgotten about, despite once having been at the very cutting-edge of this sport.

Pearson’s video represents to some extent his journey to becoming French - married to Caroline Ciavalidini, he now lives in the Provence. It's a light hearted film with many subtle, funny references, yet it also touches on issues regarding the modern attitude to rock that are becoming increasingly important in France, and the climbing world beyond.

Pearson of course is acutely aware that all this helped pave the way towards current standards, and he states "My journey to climb this route was one of the most interesting climbing experiences of my life, and I guess as a way to say thank you to the route, and to all my heroes, I knew I had to do something about it. It's a celebration of all things French, and all the guys who came before. Thanks for showing us the way."