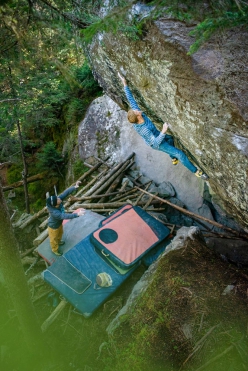 At Magic Wood in Switzerland Jakob Schubert has made the first ascent of the 8C boulder problem La Force Tranquille Direct.

Jakob Schubert is renowned above all for his fast repeats of single pitch sport climbs and rock solid boulder problems, less so for establishing his own testpieces although, truth be told, he has explored new lines up to 9a+ with his Companion of Change in the Zillertal in 2015.

The Austrian climber has now just spent two days bouldering at Magic Wood in Switzerland where he made a fast repeat of the La Force Tranquille, an 8C put up by Daniel Woods, after which he took down an old project on the same bloc. La Force Tranquill direct is described as a "kingline" of the forest" and despite being more difficult, Schubert reckons it still sits in the 8C range.

It’s worth pointing out that as per usual, the 29-year-old is on fine form: last June at Magic Wood he flashed the famous Never Ending Story. 8B+ first go is no mean task.

26.05.2020
Jakob Schubert - Lockdown to Rock-down climbing in Austria
The video of Jakob Schubert training at home during lockdown in Austria and his subsequent first 10 days climbing outdoors.