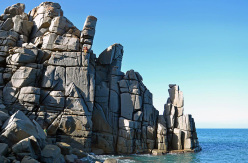 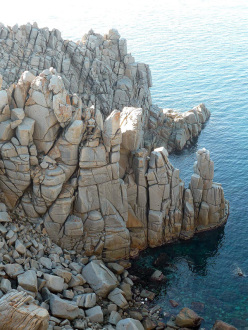 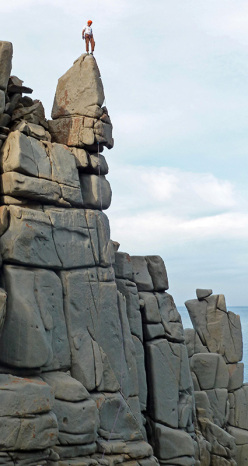 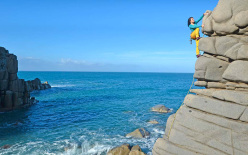 Hydra at Capo Pecora in Sardinia. By Maurizio Oviglia

Maurizio Oviglia talks about the first ascent of Hydra, the latest route to be added to the trad climbing area Capo Pecora in Sardinia.

In May two and a half years ago Giampaolo Mocci, Gianluca Piras and I descended into this valley to explore its cliffs. The first route that caught our eye was a beautiful crack on the left. While Gianluca climbed it, I took some splendid photos that subsequently revealed this hidden corner to climbers throughout Europe. When it was my turn to climb the crack I was stunned by its beauty and the absolute unique rock quality. We took some more photos we were also attracted to another line just to the right. A smooth section looked like it might be at least 7a. Too dangerous to climb with a cam three metres below our feet! We could place a bolt, we thought, but we weren't completely convinced by this idea since we were beginning to think about making this small paradise a clean climbing area.

A year later, while exploring the nearby walls, I took some photos of this sector from above. Surely another line could be climbed to the right of Gianluca's Pecora Puzzle? But I soon forgot about this and another year went by during which I devoted time to Big Ben, made the film Blu Trad and then the video Poseidon.

A few days ago I returned once more. The sector opposite that crack was ideal to teach some trad climbing. The first route here, established by Marco Marrosu, is a great 15m crack. Marco had called the sector Nel Regno di Onan and we quickly climbed a dozen or so routes, all equipped with just a bolted belay, so that it might become a sort of trad climbing "gym". While I belayed my partner I looked across and suddenly I managed to imagine a logical line to the right of the crack that avoided the blank section. No bolts would be needed! That was it! It was so logical, why on earth had I failed to see it beforehand? Suddenly I felt as if climbing the line was the only thing that mattered. I wanted to try it straight away, but by now it was too late. And so, heavy hearted, I began to stow away my Friends.

During the night I couldn't get the route out of my head and the next morning was the start of the Christmas holidays which meant my daughters didn't have to go to school. I, too, should have stayed home to catch up on some work. But I checked the weather. A good weather window was forecast for that morning, scirocco breeze, calm seas. Perfect! I needed more that half an hour to convince my daughters to follow me to Capo Pecora but in the end I succeeded. 100km later, down the 30 minute walk-in and their complaints continued to fall on deaf ears. Talk about being in love... But when we got to the bay I noticed that the rock was wet. How come? Damn, perhaps due to yesterday's tides! I still hadn't understood how things work down here! My daughters looked at me questioningly, but I wanted to give it a go nevertheless. But Dad, what are you up to? It's wet! Just let me give it a go! Circus acts enabled me to keep jammed into the crack, and thanks to the gloves and right technique I managed to slip a little less. Sort of! But despite the sun, below the roof that led to the final section I had to give up. I'd have to climb round onto the north side to reach the top and here the rock was unclimbable. Oh well... Interestingly, I thought this route would be difficult, but it wasn't. We took some photos and then lazed around on the opposite rock face, finally in the sun. Sara and Elena even led their first trad route, a splendid 4c arête...

I returned on 27 December with Fabio to add the last belay for the climbing course. Once again though the face was dripping wet. No go. Once again I had to repress, not without difficulty, my desire to climb Hydra. The rock climbing course took place on 6 January. At least 20 of us climbed that day, learnt about climbing techniques they'd heard so much of but never actually tried before. The sun set and we took a nice group photo. Hydra lay there, mockingly, still unclimbed...

Yet another day, yet more apparently favorable weather conditions. So there I was again, once again with Fabio. The sea cliffs were slightly dryer, I had to give it a go. No warm up, I jumped straight on to the route. And reached the roof fairly easily, despite the damp. I gave it a go, but the rope drag was terrible, I hadn't extended the first piece of gear enough! And yet I knew that I should've done so! The sun shone onto the left-hand side, I managed to move onto the arête, but not where I wanted to, where I'd imagined the line to go. I placed a Totem, the cams wedged too tight, but it was the only one I had! I got established on the little ledge below the final section, a smooth slab awaited. In the middle a lone flared crack might take some pro. A red Totem, possibly a yellow BD, but I didn't have any left! I looked down: I had two, where on earth did I place them? What an idiot! I tried a bit but without the right gear I didn't trust myself. I fiddled around for 20 minutes then gave up and down-climbed. And calmed down and got the right gear. Shortly afterwards I climbed the route again, extended the pro, breached the roof direct and now had the right cam for the final section. I carefully balanced on the summit and looked around. The beauty of this place was quite simply breath-taking. The route wasn't difficult, perhaps it was easy even. 6b, 6c perhaps, who knows in these conditions? In short, I didn't do anything special, and perhaps no one will ever repeat this route, so different and far removed from what climbers normally "like". That evening I posted a photo of Hydra on twitter, adding "new trad climb". But, someone commented, what trad climb, what route, could this be if it's only single-pitch...?