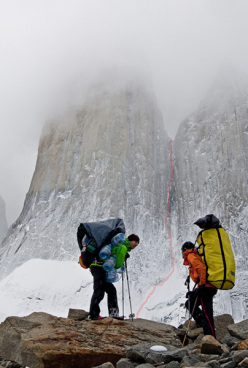 Hansjörg Auer and Much Mayr and the line of Waiting for Godot (750m, 7b) Torres del Paine, Patagonia.
Photo by Hannes Mair/Alpsolut

Hansjörg Auer and Much Mayr have recently returned from their trip to Patagonia where despite terrible weather conditions they managed to forge "Waiting for Godot" (750m, 7b) along the East Face of Central Tower to the Col which separates the Central and North Tower.

The formidable Austrians, who have teamed up together for extreme climbs from the Dolomites to Oman, sent the following brief report about their "Waiting for Godot" (750m, 7b) "the weather was really poor and conditions on the wall miserable, but nevertheless we managed to climb a new route. Although this ends on the col between the Central and North Tower, at least we climbed it all free..." Auer added that this trip was "one of the most intense experiences to date..."

Stay tuned, a full report will be published shortly. In the meantime, if you haven't seen it ye, we recommend this video interview with Hansjörg Auer after his mind-blowing solo of the Fish route on the Marmolada, Dolomites.