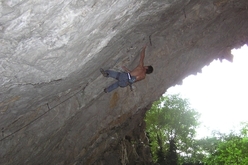 Matej Sova working "Halupca 1979" 9a at Ospo, Slovenia prior to the successful first ascent, carried out on 22/09/2008.
Photo by www.alpikor.org

PORTFOLIO / gallery Portfolio: Halupca 1979, new 9a for at Ospo by Matej Sova

Matej Sova has made the first ascent of Halupca 1979, 9a at Ospo, Slovenia.

On 22 September Matej Sova completed the first ascent of Halupca 1979, a impressively steep route through the massive Spider roof at Osp, Slovenia. The line was bolted by fellow Slovenian Klemen Becan a year ago and Sova sent the route, with its intense 9 move upper crux, after enduring more than 30 redpoint attempts.

Halupca 1979 is the third route in Slovenia to be graded 9a, the other two are Martin Krpan 9a and Sanskij par ext, both located at nearby Misja Pec. Due to its fierce steepness it stands in contrast to another Sova first ascent, the 40m, 90 move stamina testpiece Ekstaza 8c+/9a at Misja Pec.