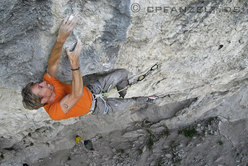 Andreas Bindhammer during the first ascent of Hades 9a at the Götterwand, Tyrol, Austria.
Photo by Christian Pfanzelt

PORTFOLIO / gallery Portfolio: Hades 9a at the Götterwand by Bindhammer brothers

On 05/07/08 Andreas Bindhammer made the first ascent of Hades 9a at the Götterwand, Tyrol, Austria. His brother Christian repeated the route four days later.

Andreas Bindhammer continues to forage new routes. Four months after making the first ascent of 'St. Anger' 8c+/9a in Italy's Arco, the German climber has now made the first ascent of Hades 9a at Austria's Götterwand. After almost a year of sporadic attempts Andreas sent the route on 05 July in poor conditions (read thunder and lightening) while his brother Christian carried out the first repeat four days later.

Andreas puts their success down to the intensive bouldering they did last season at the recently discovered NePaPla-Wand in the Allgäu: "Firestarter" Fb8b/8b+ "Frontman" Fb8b, "Icebound" Fb8a+/8b and "Ristretto" Fb8a+ are just a small selection of their first ascents there.


A selection of top climbs by Andreas Bindhammer