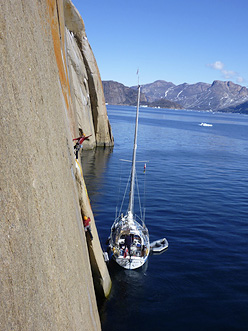 The interesting start of Seagull's garden
Photo by Olivier Favresse

On the Red Wall in Greenland Nicolas Favresse and Ben Ditto carried out the first ascent of Seagull’s garden, while Olivier Favresse and Sean Villanueva established the nearby Red chili cracker.

The Greenland 2010 team comprised of Nico Favresse, his brother Olivier, Sean Villanueva and Ben Ditto has just scored its first success, climbing two new routes up one of countless beautiful rock faces that jut out of Greenland's fjords. Although there are no precise details, the rock face has been aptly dubbed The Red Wall and is 400m high.

After a minor hiccough at the start - read a broken engine which resulted in a committing 300 mile tour through the labyrinth of icebergs - captain Bob edged the sailing boat close to the granite.

Nico recalls the ascents as follows: "Starting the climb was one of the most incredible beginnings we’ve ever done! Bob brought Dodo’s Delight right up against the base of the wall from where we had to jump on to the rock, with the intimidating black abyss of the deep sea below us. About 20 hours of climbing later we walked down the other side where Bob was waiting for us anchored next to a Bahamas like beach. The two new routes are about 400m long and are called: "Seagull’s garden" and "Red chili cracker". Now we are back in Upernavik trying to fix the second half of the motor. Hopefully soon enough we will get back to the fjords for some more adventures."