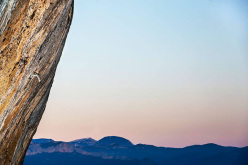 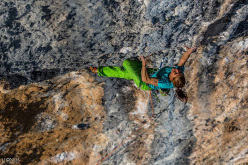 At Oliana in Spain, Slovenian climber Domen Skofic has repeated Papichulo 9a+. Mind Control has been repeated by both Mina Markovic and Klemen Becan, while Skofic has even managed to flash this 8c+.

The Slovenia Climbing Team is currently shaking the foundations of the Contrafort de Rumbau, better known as the winter hotspot Oliana in Spain. Yesterday morning we mentioned Mina Markovic's first 8c redpoint and first 8b+ onsight; she is in Catalonia along with various teammates including 20-year-old Domen Škofic who has now repeated Papichulo, the 9a+ stamina testpiece freed by Chris Sharma in May 2008 and repeated by just a handful of other climbers in the meantime, including Adam Ondra, Jakob Schubert, Ramaon Julien Puigblanque and Sachi Amma. For his redpoint Škofic needed a mere 10 attempts split over 5 days, and after six 9a's, this is now not only his personal best, it is also the first ever 9a+ climbed by a Slovenian.

When things are on a roll they're hard to stop and this explains why Markovic, after her repeat of Fish Eye 8c, yesterday also clipped the anchors of Mind Control, another beautiful stamina fest deemed 8c+ by most of those who have repeated it. Markovic needed just 3 attempts in 2 days, a result which she herself describes as "…a real surprise. I absolutely didn't expect to send it that quickly." Further confirmation of the Slovenian onslaught can be found in another two ascents of Mind Control yesterday, by Klemen Bečan (third go) and the startling flash ascent by Škofic who instead of resting that day, gave in to temptation and let himself be “guided” by his teammates... Until now this route has been onsighted by Adam Ondra and flashed once, by Silvio Reffo.