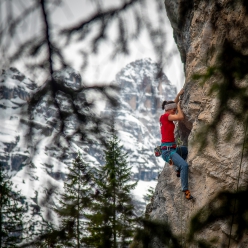 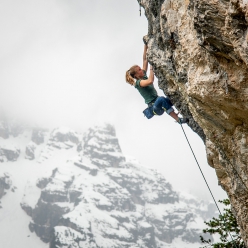 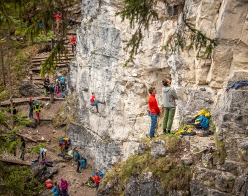 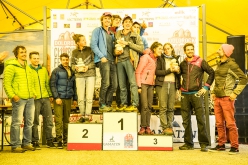 Bad weather did not stop the 7th edition of the Dolorock Climbing Festival which welcomed a record number of climbers. Organised by the ‘Gamatzn' climbing club, the meeting took place from 24 to 26 May 2019 at Sexten and in the Höhlensteintal in the Dolomites, close to the world famous the Tre Cime di Lavaredo, and once again it was an important moment for sport and culture

The Dolorock Climbing Festival took place once again from 24 to 26 May 2019in the South Tyol, Italy. Much to the delight of the "Gamatzn" club organising committee, climbers from a host of different nations gathered in Sexten for the event. Despite the wet weather during the contest, the maximum number of participants took part and both the drive-in cinema and the party proved to be highly popular.

The festival began on Friday evening with the drive-in cinema at the Nordic Arena car park in Toblach.

On Saturday 200 climbers were not put off by the rain and competed in the Red Point Fight that took place on the crags dotted throughout Höhlensteintal, Val di Landro in Italian. Just like last year, Katrin Mair and Carmen Brugger placed first and second in the women's pro category, while Jana Messner placed third. Daniel Siller won the men’s pro category as well as the overall victory, followed by Patrick Tirler and Mathias Senfter. Victory in the junior girls went to Elisabeth Lardschneider, followed by Alea Steger and Madlen Marinelli; the junior boys was headed by Philip Widmair beatf Daniel Watschinger and Jakob Kofler. In the men’s 50+ Heli Mühlmann climbed his way to victory once again. beating Toni Obojes followed by Luigi Maioni.

Seeing that the most impetus was on fun and climbing together, those who came closest to the average score also received great prizes.

After the awards ceremony the celebrations continued into the night with dancing at the Dolorock climbers’ party, with the “Pink Armada” rock band ensuring a great atmosphere. And as usual, the legendary party was organised by the Circolo Culturale from Toblach.

Sunday awoke to the climbers’ brunch and yoga for climbers in the Dolorock Arena, directly next to the campsite.

The Dolorock organising committee will now begin its summer break. Members are already looking forward to the 8th edition of the Dolorock Festival at the end of May 2020!


Organised since 2013 by Gamatzn, the South Tyrolean climbing club that brings together climbers and mountaineers of Val Pusteria, Dolorock aims to use climbing to overcome linguistic, cultural and geographical barriers. The meeting is designed welcome diversity, promote tolerance and nurture critical discussions on issues related to climbing and mountaineering.