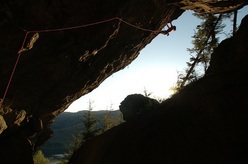 On 02/05 Dave Macleod made the first ascent of Metalcore F8c+ at The Anvil, Scotland. This is now the hardest sports route in the country.

There seems to be no stopping Dave Macleod at the moment: on 02/05 the Scotsman made the first ascent of Metalcore F8c+ at The Anvil, an enormous freestanding schist boulder at Lochgoilhead, north of Glasgow.

The route takes the line of Body Swerve (an 8c in its own right first ascended by Macleod in 2006) before following a crackline to the lip of the roof. The Scotsman first bolted the project in 2004 but it wasn't until last week when all things finally slipped into place, third redpoint of the day, to stick the elusive finishing dyno.