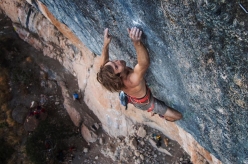 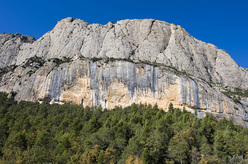 The video of American climber Chris Sharma repeating Joe Mama, a 9a+ sports climb freed by Klemen Bečan at Oliana in Spain.

Sometimes it even happens to him, the King, to underestimate the real difficulties of a climb and therefore find himself in troubled waters. Last winter America’s Chris Sharma attempted a new line at his home crag Oliana bolted by his friend Joe Kinder, but despite his epic battles the crux proved simply too intense. Sharma worked the route with his climbing parter Klemen Bečan and in the end it was the Slovenian who successfully nabbed the first ascent at the start of March.

The Spanish sun then made the Contrafort de Rumbau - as it is correctly referred to - baking hot and Sharma was forced to abandon his project. Last week though, without any expectations whatsoever and well in advance of the classic winter season when conditions are traditionally at their best, Sharma pulled off the first repeat of Joe Mama, 9a+. "So refreshing to come back this season with an open mind and no expectations other than to just enjoy climbing" was his comment after the redpoint.

Talking about Sharma and troubled waters: in related news we reported last week that Jernej Kruder and Jan Hojer are currently attempting Es Pontas, the famous deep water solo Sharma established in 2006 at Mallorca. Over the last couple of days Kruder and Hojer have made important progress, have decoded all the sequences and now according to the Slovenian "only 4 moves separate me from my dreams to come true." Four moves, but in order to climb them they also need to sea to remain calm…