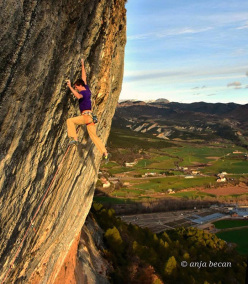 Klemen Bečan frees 9a+ at Oliana in Spain

Klemen Bečan has made the first ascent of Joe Mama, a 45m 9a+ bolted by America’s Joe Kinder at Oliana, Spain. The ace Slovenian climber first started attempting the route last December, at times trying it even 5 times a day "just to get stronger". After falling off twice with the final jug in his hand, Bečan finally freed the route on Tuesday 1 March.

"It’s a 45m pure endurance climb. It starts with a 7c section that leads to a relatively good rest and then the first boulder section past a bad undercling to another rest in the middle of the route. Not the best shakeout, but better than nothing before the long and powerful moves to the top."

Joe Mama
is Bečan’s hardest redpoint to date if the grade is confirmed, making him the third Slovenian to climb 9a+ after Jernej Kruder and Domen Škofic in December 2014.