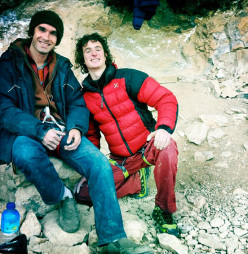 The complete video of La Dura Dura 9b+ at Oliana in Spain, the hardest sport climb in the world freed by Adam Ondra and repeated by Chris Sharma in 2013.

This video is destined to become an instant cult: the entire story of La Dura Dura, the sport climb at Oliana in Spain courted and contended by two of the world's very best: America's Chris Sharma and Adam Ondra from the Czech Republic. Their attempts carried out together captured everyone's imagination and above all served as a stimulus to progress and achieve the hitherto impossible. In February 2013, after 9 weeks of intense battle, Ondra succeeded in the first free ascent while a month later Sharma carried out the first repeat. What a journey!