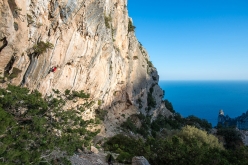 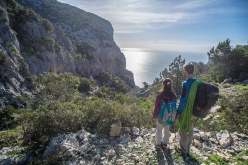 Cengia Giradili: walking down the approach
Photo by Riky Felderer 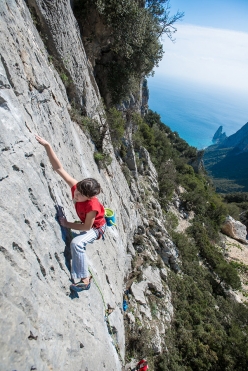 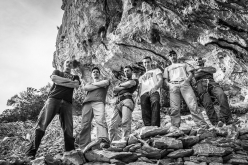 Richard Felderer introduces the new crag Cengia Giradili at the foot of famous Punta Giradili close to Baunei in Sardinia. 22 new routes from 5b to 8b in a spectacularly beautiful setting.

In 2012 I travelled across Sardinia with James Pearson and Caroline Ciavaldini to film the movie Hyknusa with Pietro Porro and as we neared Punta Giradili we dreamingly looked at the long crag which runs parallel to the base of the mountain along its approach path. We uttered the ritual phrase "It would be great to climb some routes here", a sentence which no doubt dozens and dozens of climbers have said before and after us. But then, as everyone else, we darted down to climb the beautiful, exposed and panoramic routes on Punta Giradili. A crag like this is, truth be told, far too big and ambitious for a "continental climber" who has limited days of holiday in Sardinia!

As things turned out I moved to Sardinia, right there in fact, to run a Bed & Breakfast, and this gives me a lot of free time in low season. On my rest days I started to travel the width and breadth of the entire area to get a feel for it, and during these trips I discovered a number of new climbing areas suitable for various "games", such as trad climbing, multi-pitch climbing and single pitch cragging. I helped bolt some new crags, some friends and I established two new trad climbing sectors, we’ve started some long multi-pitches, so on and so forth. At the same time I became a member of the legendary Ragni di Lecco mountaineering club, with the implicit promise of somehow helping the club’s projects.

One of these is called "La pietra del Sud", Southern Rock, which rotates around the Ragni di Lecco bolting new crags in Southern Italy and Sardinia. And seeing that there’s plenty of rock in Ogliastra... I suggested to the club president Fabio Palma to stop by this gear and check it out for himself. I sent him some photos of my reccies, we discussed things on the phone and a short while later the club approved the project. Bolts and belay chains were bought and works started.

Actually, on the first day I didn’t have a clue where to start! I chose an area a bit further away from the car (20 minutes) but certainly extremely impressive and began bolting the most imposing and obvious line, which I’d later call Pumping Iron, in honor of my secret love for body building, or perhaps because getting through the overhang… is a full body pump!

It was really hard work (at this point serious new routers will have a smug smile), abseiling in from the top was out of the question and, even it had been possible, perhaps it would have been even worse seeing that the cliff overhung so much! With the help of some skyhooks, a helping hand from Elena and some extreme skyhooking from Passini we managed to place the first belay! The project began to take shape. In the meantime, in addition to tireless Passini, some of my new local friends joined the group, namely Cristian, Francesco and Roberto, and it was thanks to them that some more "human" sectors were bolted closer to the car park. This is how, slowly but surely, the first five sectors began to be developed. I say the first five, because there is really so much rock that several more will be bolted… in due time! We’re not grease lighting at establishing new routes, but nevertheless we managed to bolt, clean and brush 22 pitches during a dozen days of back-breaking work.

The easy routes are obviously on slabs or full of holds, but having said that they’re technical and required some meticulous cleaning and gardening. The pitches graded 8a or harder were massacring and finding someone willing to belay you for hours while you drill and curse away hanging off an insecure skyhook… wasn’t to be taken for granted! The climbs graded 7a/b were... absolutely perfect, we just needed to place the bolt and the route was ready to be climbed! Hopefully we’ll find more like them! Jokes aside, we got the ball rolling: a handful of routes from 5a to 8b have been freed, various other climbs still await their first ascent and more will be added in the future. The rock is always fantastic, at times exciting even, with pitches up goutte d’eau, extremely weathered slabs and steep tufa overhangs.

The work was polished off by the trio comprised of Andrea Ratti, Marco Zanone and Luca Passini, who were faced with the "difficult" task of trying their luck on the most demanding climbs. Their performances may seem boring, seeing that nowadays most news reports deal with 9a or harder. But for us, the bunch of enthusiastic locals, watching them free these grade 8 routes in just a few goes, or onsight even, was awesome. And not without curses and spectacular falls, as sometimes happens on virgin rock where inevitably some holds break off. All in all it was great fun and I’ll slowly continue to bolt some new climbs. This is only the beginning!

Getting there
From Baunei take the road to Golgo, drive over the hill and at the first downhill bend take the dirt road that continues straight on. Continue to a rather unevident fork and turn off right. Continue for circa 2km to a fork that leads to the "Du Ispiggius” pigsty. Walk through the gate, remembering to close it, and follow the path down to the Giradili ledge. Where this becomes less steep, about 10 minutes from the car, lies the first sector"Sette Gambe" followed by "Le Terrazze”, then"Gocce nell’oceano”etc. Continue on for another 5 minutes to reach sector "Alieni".


Note
Those who wish to "contribute": the Baunei town council askes to be informed via email about all new routes. All those wishing to establish new climbs are kindly asked to adhere to this small beaurocratic hurdle. In any case, please feel free to contact me.