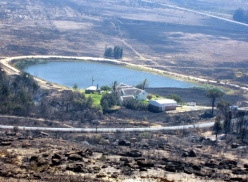 The fire at Rocklands in January 2013: Pakhuis Farm, a lucky escape!
Photo by Charité van Rijswijk

A wildfire has devastated 500 square-km of land in the Cederberg region in South Africa which includes the Rocklands bouldering area.

Fires raging across South Africa's Cederberg have caused extensive damage to the region which includes the world-famous Rocklands bouldering area. The fires were caused by lightening last Wednesday and immediately spread due to strong winds, burning all the vegetation throughout the reserve. Most of the fires have now been put out but tragically one volunteer firefighter died in the fire.

The true extent of the damage still needs to to be assessed but it is believed that the Rocklands area has been severely affected and according to www.climbing.co.za the future of the climbing here is currently uncertain as the land owner has previously closed access to some areas in the aftermath of some fires because of “extreme eco-sensitivity”.