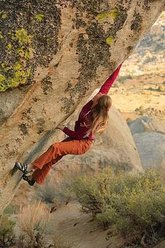 On Friday 18 January Lisa Rands made the first female ascent of The Mandala V12, one of the most famous boulder problems at the Buttermilks, Bishop, America.

Lisa Rands from America continues to push the ante both physically and mentally. The 32-year-old climber is slowly but surely redefining female bouldering, and recently she carried out an impressive first female ascent of The Mandala, the famous boulder problem located at the Buttermilks, Bishop, U.S.A. First climbed by none other than Chris Sharma in 2000, this granite problem immediately caught climbers' imagination and has quickly become one of the most famous and sought-after testpieces in the world. Repeated by Dave Graham five months after Sharma's ascent, the Mandala received its first flash ascent by Frenchman Anthony Lamiche in 2002.

Lisa sent the V12 (Font 8a+) line in perfect crisp conditions last Friday immediately after feeling "strangely certain of success". In an interview for America's NBC Sports, Lisa stated "Women are perfectly capable of climbing all the hard tall scary things that the guys climb... I really like to put myself out there on the line. 30 feet off the ground you really have to focus to relax yourself. You have to flip your mind back and fourth from this raw power to a very calm state."

Obviously a climber capable of listening to her internal voice and keeping her mettle when in the intimidating no-fall zone, Rands astounded all in 2004 when she crossed the ocean to climb End Of The Affair E8 6c at Curbar, England. In doing so she became the first female climber to ascend E8, and in 2006 she repeated this performance with her ascent of one of the all-time gritstone icons, Gaia E8 6c at Black Rocks.

Lisa spends most of her time on the road bouldering (though in 2005 she couldn't resist a trip to Patagonia where during the only spell of good weather she ascended Clara de Luna on Saint Exupery) and last season she repeated the awe-inspiring highball This Side of Paradise (V10), one of the boldest and highest lines at the Buttermilks. For those wanting to find out more we recommend the two part NBC video shot for the occasion - attentive viewers new to bouldering techniques will notice the dynamic pad spotting when she falls off from way up high!

Lisa continued: "The amazing thing with climbing is that you set a goal, you achieve it, and it's like the glory last for about 30 seconds before your mind starts wandering on to the next thing you want to climb. It's kind of never ending"

What's next on the agenda therefore? Who knows, possibly the sit-down start to The Mandala?