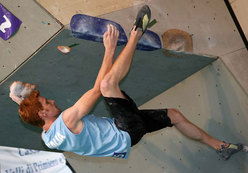 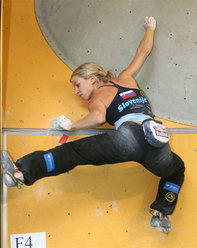 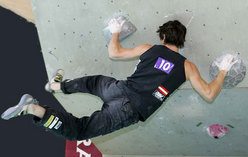 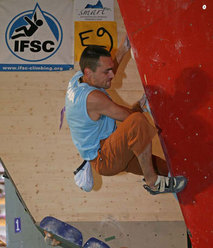 The 6th stage of the Bouldering World Cup 2007 took place in Fiera di Primiero (Italy) last weekend and was won by Dmitry Sharafutdinov from Russia and Natalija Gros from Slovenia.

Fiera di Primiero or, put in other words, the Bouldering World Cup never belies it's spectacular nature with sensational twists, confirmations and hopes. Hopes and the future, represented by the 20 year old Russian Dmitry Sharafutdinov who last weekend won his first ever stage of the Bouldering World Cup, and confirmation from the 22 year old Slovenian Natalija Gros. This "veteran" Lead champion confirmed her excellent form by doubling her takings after victory a fortnight ago in Grindelwald.

The sixth stage of the World Cup was marked by a different confirmation, one which all had reckoned with: home hope Gabriele Moroni regained his form to place second, while the rest of the Italian team followed close behind: Christian Core placed seventh, Stefano Ghidini and Jenny Lavarda ninth.

Dmitry Sharafutdinov won his first ever event in a nail-biting finish, sending 3 of the 4 boulders. Gabriele Moroni made a mighty comeback (19th in the qualification) to place provisional 3rd after the semi-final and then finish second overall, behind Sharafutdinov and just three attempts ahead of Akito Matsushima,the japanese "revelation".

Kilian Fischhuber placed "only" fourth, and the undisputed leader of 2007 had led the competition, only to be blocked by a truly difficult final which gave him one top, just like Mykhaylo Shalagin (5th) and Guillaume Glairon Mondet (6th), separated by their number of attempts. Fischhuber's result does little to change things up top: with just two more comps to go and 181 points clear of Dmitry Sharafutdinov, he still firmly leads the Bouldering World Cup 2007! The fight for second and third place is still all up for grabs, with the likes of Sharafutdinov, Verhoeven, Matsushima, Julien, Shalagin and Moroni seperated by a mere 74 points.

The women's World Cup is far less certain, with Natalija Gros (two consecutive victories) and Olga Shalagina (2nd palce in Fiera) a mere 8 points from the leader Juliette Danion (5th place in Primiero). Gros qualified 7th in this "crazy" competition, placed 4th in the Semifinal then won thanks to an incredible second top in the final which she, and the thousands of spectators, are unlikely to forget: Natalija had sent the problem straight off but forgot to match hands. The result: the blond climbing ballerina had to attempt a second, then third time. Then a fourth... just as time was about to run out... No doubt she offered the crowd a tense and emotional finish which she could have done without....

All other finalists finished with just one problem solved, led by Olga Shalagina 2nd and an excellent Akiyo Noguchi 3rd. Natalia Perlova refound her form to place 4th, ahead of Juliette Danion and ChloÃ© Graftiaux. Difficulty specialist Jenny Lavarda placed ninth, while Sandrine Levet welcomed her return to competitions with an excellent 8th place. Levet has won all there is to win and her start was astounding: first in the qualification... but bouldering is a fickle discipline and victory in Fiera di Primiero always hangs by a thread... of hope.

The Bouldering World Cup now goes on holiday and returns for the penultimate stage at Aviles (ESP) on 17 September.