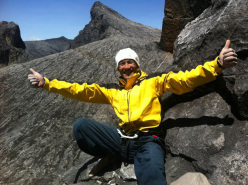 Yuji Hirayama celebrating after having freed has the 100m multi-pitch Pogulian Do Koduduo 9a, Mount Kinabalu, Borneo
Photo by Reel Rock Film Tour

In the Mount Kinabalu National Park in Borneo Yuji Hirayama has freed the multi-pitch Pogulian Do Koduduo 9a, while Daniel Woods has added Tinipi 9a+.

Yuji Hirayama, Daniel Woods and James Pearson are currently on the island of Borneo where they have come up trumps with a series of important ascents which check in as some of the hardest in SE Asia. The American climber has just freed Tinipi – dream in the local language – a great single pitch 9a+ bolted by Hirayama, while the Japanese has freed Pogulian Do Koduduo, return of the soul.

This latter climb was the project Hirayama had shown us with his usual contagious enthusiasm last year during the Arco World Championship: an extraordinary leaning prow, at the very limit of physics and the power of gravity, with a 100m line which commands utmost respect. This "dream project" resisted until the 19th of June when Hirayama redpointed the line, a 65m 7c+ "warm-up"” followed by 35m of 9a climbing.

Being no slouch, James Pearson got up to his usual tricks and has bolted and freed some “crazy” 8b's. All these lines are located on the exceptional granite within the Mount Kinabalu National Park (as well as UNESCO World Heritage Site) in the north of the island. A final important detail: apart from the technical difficulties needed to repeat the routes, visiting climbers will need to be on top physical form since the lines are located at an altitude of almost 4000m!