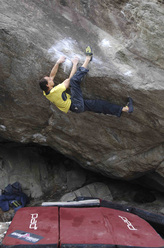 On 17 March Bernd Zangerl carried out the first repeat of "From Dirt Grows The Flowers", the Fb8c problem first climbed by Dave Graham in 2005 at Chironico, Switzerland.

Congratulations Bernd, you managed the first repeat
Yes, it's always nice and interesting to carry out a first repeat. But I have to be motivated for it. On the whole I prefer to try my own projects, but since it snowed so much this year, I tried other things... climbed other things. "From the dirt" is interesting because it has a different types of moves, and also because it had been attempted by numerous other climbers.

This year you needed 7 days to climb it. Is that quick?
Speed is relative. On the first day I managed to climb all the moves except for the first two. With a bit of luck I could have climbed it that first day. But then I needed to return another couple of times, much depends on the conditions and this winter these changed a lot.

What can you say about the grade?
The problem is slightly harder than Dreamtime or New Base Line, but these problems date back to 2001 and 2002 and they were the first of these difficulties. It was hard to compare them at the time, now though there are plenty of really strong climbers, the level is really high.

So what about grades in general
Just because you standards rise, you don't necessarily have to downgrade. In other aspects of life one describes this as being a natural development, progress. It takes time for a grade to settle and each climber has personal strengths and weaknesses. How much a problem suits your personal style is really important in bouldering, most climbers forget this fact.