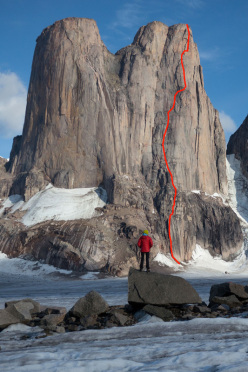 "If Yosemite valley were here, it would be nothing more than one of many side valleys... The landscape is quite unbelievable, I'm just really really impressed." This is Ines Papert's conclusion after her expedition to the remote Baffin Island along with Jon Walsh and Joshua Lavigne which resulted in Sensory Overload, a new line up Mount Asgard. The route is the first to breach the NW Face of Mount Asgard's south tower and was climbedalpine style from July 24th-26th in a 60 hour round-trip from base camp.

The trio reached the Auyuittuq National Park in mid-July, spent three days approaching Mt. Asgard and then established base camp on the Turner Glacier directly beneath its N Face. After a short rest and what is possibly the first free ascent of the nearby south buttress of Mt. Loki they then committed themselves to the 1200m unclimbed north face of Mt. Asgard’s south tower.

Setting off with three days of food and fuel and without a portaledge, the trio climbed the first 12 pitches to a large ledge system where, after searching for a logical way upwards and climbing a further 2 pitches, they decided to bivy for the night beneath a roof and sheltered from the rockfall. The next morning they jumared up their ropes and continued towards the summit, which they reached in very poor weather at 11.00pm. All 29 pitches were climbed without the use of bolts and on-sight, except for a five-meter section of icy squeeze chimney with verglassed walls and wet move on the final pitch, both of which would have been straightforward climbing in different conditions.

As sometimes happens, it was the descent which proved the hardest part of the entire climb: in high winds and poor visibility they quickly abseiled down the south face, but with only 300m of 4th class scrambling separating them from the glacier the rain turned to snow and they were forced to make a second bivy. Six very cold and wet hours later the sun came out and the three returned safely to their base camp.