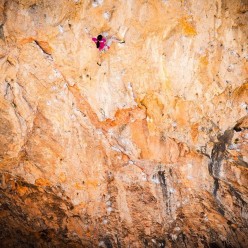 Breaking news: Ashima Shiraishi has redpointed Open Your Mind direct, a route considered at least 9a at Santa Linya in Catalonia, Spain. In 2012 the young American climber made national and international headlines at the tender age of ten with her ascent of the V13/8B boulder problem Crown of Aragorn at Hueco Tanks and now, three years down the line and with a number of 8c+ redpoints at Red River Gorge to her name, she had raised the bar further still and in an irrefutable manner

Open Your Mind direct begins with a hard boulder problem and then gives way to pumpy stamina climbing all the way to the top of the massively overhanging cave. A while ago a hold broke off high up on the climb, leading to speculation that the route may be harder than 9a, possibly even 9a+. In any case, Shiraishi gave a superb demonstration of her talent by sending the route after a mere four days of attempts.

With this feat Shiraishi has set a series of records that are hard to believe and even harder to beat: at a mere 13 years of age she is now the youngest female to have climbed a route of these difficulties; she is also the youngest to have freed a route this difficult after an important hold broke.

Just as a basis for comparison: Adam Ondra was 13 when he sent his first 9a, and in Shiraishi's case the route may be even harder still. It is worth remembering that female 9a was redpointed for the first time by Basque climber Josune Bereziartu with her repeat of of Bain de sang in Switzerland. That was back in 2002... when Shiraishi was just one year old.