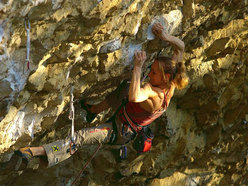 Angela Eiter repeats Strelovod 8c at Misja Pec, Slovenia. The Belgrade stage of the Bouldering World Cup 2008 has been cancelled.

Angela Eiter never lets up. On a recent trip to Slovenia's Misja Pec the Austrian superchampion showed that she is on great form, redpointing the classic "Strelovod" 8c third go, while for "Sonce v oceh" 8a+ and "Corto" 8a she didn't have to think twice.

This great form on rock seems not to be enough though on plastic - in a recent Austrian Boudering Championship Eiter failed to qaulify for the final. This just goes to show how difficult bouldering comps are and, importantly, how strong the Austrian field is. Although it's always dangerous to make predictions, we're sure this year is going to prove interesting!

Talking about bouldering competitions: the Belgrade stage of the Bouldering World Cup due to start tomorrow has just been cancelled for reasons still unclear. It seems as if, just like in the European Championship in Russia, the wall isn't up to world standards. This is a shame, especially for all those athletes who are already in loco...