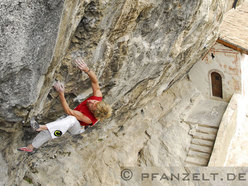 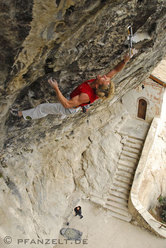 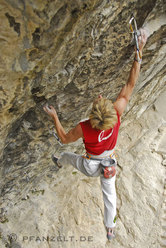 Great first ascent by Andreas Bindhammer at Arco with his new 'St. Anger' 8c+/9a at the Eremo di San Paolo.

On 22/03/2008 Andreas Bindhammer made the first ascent of "St. Anger", a project bolted by Francois Legrand at the Eremo di San Paolo, Arco. The German climber had attempted the route last year but the 28 moves were simply too extreme at the time.

Now though, after a year up and down the Campus board, Andreas has managed to stick the crux moves, a blind dyno to a sloper, before fighting his way to the finishing holds. Success came about on his third attempt of his fourth day on in 2008, with temperatures just around the 11°C mark.

The new route is located to the right of Zauberfee 8c+, freed by his brother Christian in 2003 and repeated immediately afterwards by Andreas. Zauberfee recently made our headline news when it was repeated by the talented Gabriele Moroni and "acquired local" Cristian Brenna.

14.05.2003
Zauberfee, 8c+, by the Bindhammer brothers
On 13/04 Christian Bindhammer frees "Zauberfee" 8c+, at the Eremo di S. Paolo (Arco). And his brother Andreas Bindhammer repeats it a few days later.