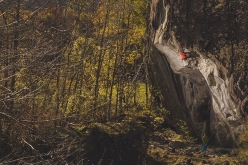 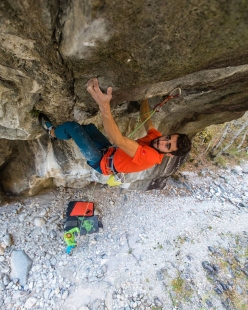 Italian climber Andrea Zanone has redpointed his first 9a sports climb Coup de Grace in the Canton of Ticino in Switzerland, first ascended in 2005 by America’s Dave Graham.

Half a grade may seem like not very much, but as you get closer to your physical limit, difficulties increase exponentially. Italy’s Andrea Zanone succeeded in making the grade two days ago when, after three 8c+, he redpointed Coup de Grace in Val Bavona, Switzerland. Freed in 2005 by visiting American Dave Graham, the line is famous for its difficulty and, above all, for its beauty. So much so that after the first repeat in 2011 Gabriele Moroni described it as "Probably the best extreme granite route in the world!" In 2015 Stefano Carnati failed to resist this draw, and now 24-year-old has clipped the anchor after putting in circa 15 attempts spread out over 5 days in total.

Asked why this climb, which is across the border and not just around the corner, Zanone told planetmountain.com, "I started trying it about a month ago. I chose Coup de Grace because it’s always fascinated me, from the very first time I saw it watching Dave Graham in Dosage 4, but I never thought it would become a reality. Another reason why I tried it is because it's an incredible line, all natural, the rock and the moves are crazy, 35 very intense moves, just what I like. Yeah, it would have been easier to find a project closer to home... for sure. But I really wanted to climb this line, because it’s so beautiful and unique."